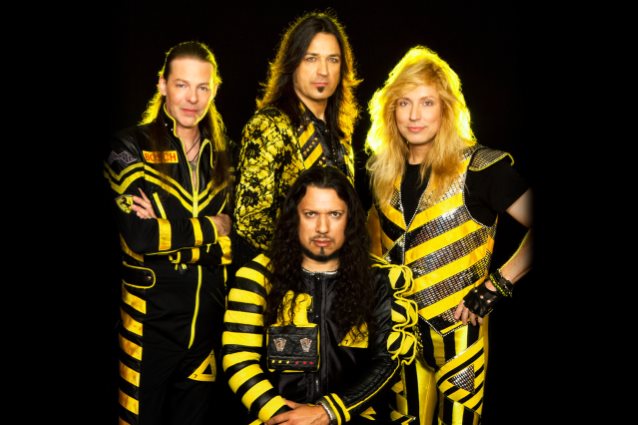 Veteran rockers STRYPER are not planning on breaking up following the completion of the current tour celebrating the 30th anniversary of their multi-platinum album "To Hell With The Devil".

STRYPER in September announced plans to "take a hiatus" in early 2017. The group explained in a statement: "Our band and ministry is facing a crossroads for a variety of reasons, including some personal matters affecting our bassist, Tim Gaines, that have affected the unity of our band."

But now, in a new post on the group's official Facebook page, STRYPER frontman Michael Sweet insisted that the band will carry on for years to come. He wrote: "Just to clarify and no matter what you've heard — Rob [drummer Robert Sweet], Oz [Fox, guitar] and myself will NOT be dissolving STRYPER.

"After the 'To Hell With The Devil' tour is wrapped up, we will be taking a break but we will NOT be breaking up.

"STRYPER will continue. It's not fair to the rest of us or to our fans to let anything or anyone get in the way of OUR vision, OUR calling, OUR purpose.

"There is more in store, much more and we're very excited about the future! God is bigger than all of this and we WILL rise above like we always do because God sustains us and has many more plans for this band/ministry.

"We love you and thank you for praying for this band."

In a recent interview with The Swerve Magazine, Michael Sweet was asked how it has been working with the same guys in the band for most of the group's three-decade-plus-long career. He responded: "Well, I mean, I'll be honest. I'm not going to lie to anybody. It's not easy. We have our issues. There are four strong personalities in this band. I'm the most boisterous. I'm the guy that talks a lot and people hear from the most, but I think if you heard from the other three guys, you would know exactly what I'm talking about. Everybody has opinions, and we're not on the same page many times. We don't see eye to eye. We have our arguments and our times of frustrations with one another."

He continued: "We made a pact to stay together. When we decide that we shouldn't stay together, that's when STRYPER will end, because I don't want to continue on without Robert, or without Tim, or without Oz. I think that it's important that the four of us stay together, or it's not STRYPER. At that point in time, if we're not getting along we need to call it quits, and not replace each other.

"I hate it when bands start replacing their band members. You know what? It degrades the band and the brand. It's not fair to fans.

"I understand in a situation where, let's say, somebody passes away, and the other three or four guys want to continue, and they had the blessing of that person. That's a different situation, but what I'm referring to is all the bickering. You've got four guys in the band, and they don't get along, so they all go off and do their own version of that band. I mean, I just think that's a joke, a complete joke."

STRYPER's latest album, "Fallen", entered The Billboard 200 chart at position No. 43 with first-week sales of just over 10,000 units — nearly all from pure album sales. The set follows the No. 35-peaking "No More Hell To Pay", which was released in 2013.