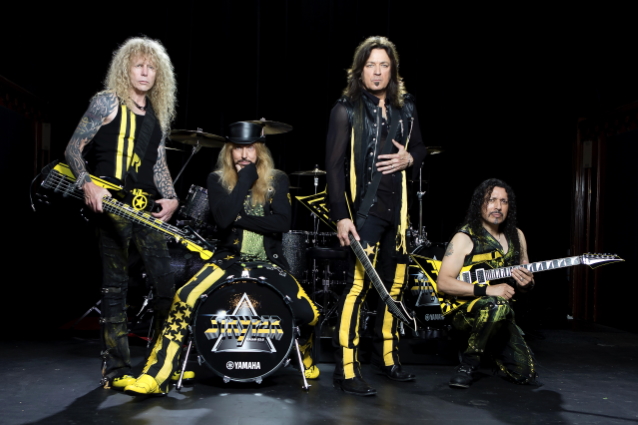 Frontiers Music Srl and STRYPER have announced that they have extended their working relationship for the release of more new studio albums together.

STRYPER and Frontiers originally joined forces in 2013 for the release of "Second Coming", an album comprised of new recordings of 14 songs from the band's early years, as well as two brand new songs. What followed has been a string of critically and commercially successful studio albums, including "No More Hell To Pay" (2013), "Fallen" (2015), "God Damn Evil" (2018) and "Even The Devil Believes" (2020). Additionally, a live album and long-form video, "Live At The Whisky" (2014) was made available. Every one of the albums released on Frontiers in the past eight years has successfully charted on the Billboard 200 chart and topped the Hot 100, Rock, Hard Rock, Current and Christian Music album charts.

STRYPER is one of the most well-known metal bands to emerge from the fertile '80s metal renaissance over three decades ago. The band first landed on the global scene in 1984 and and is responsible for such classic '80s metal albums as "Soldiers Under Command", "To Hell With The Devil" and "In God We Trust" and hit singles/videos such as "Calling On You", "Free" and "Honestly". To date, the band has sold upwards of eight million records worldwide and is a Dove Award winner and Grammy nominee. STRYPER was also the first band to have two songs in MTV's "Top 10 Video Countdown" simultaneously.

After being on a hiatus for much of the '90s, STRYPER returned stronger than ever in the early 21st century. Musically, the band has progressed and grown their fan base steadily and continuously, being one of the few "classic" metal bands of the '80s that managed to keep themselves front and center thanks to the consistency of their musical output.

Singer, main composer, guitarist and producer Michael Sweet says; "We're honored to be working with Frontiers again on the next STRYPER album. Serafino and the team at Frontiers has always believed in what we do and we've made some incredible albums together over the past eight years. They understand who we are and are passionate about our band and our brand. We're very grateful for that. We're so excited to be able to continue our relationship and I've always believed that the best is yet to come. We've released seven STRYPER albums together and it's been an amazing journey so far. I can't wait to get started on what will be our best album yet! We've strived to stay true to our roots and deliver what the fans expect — the classic STRYPER sound! Although we wish to continue doing so, we also want to branch out a little bit more and try something different as well. We'll keep stretching out and working hard to stay close to who we are yet experiment a bit more and try a few different things along the way. I know it will be an amazing album!"

Frontiers president Serafino Perugino says: "I second Michael's words. Working with STRYPER has been nothing but an absolute pleasure and an honor. They have vision, strong guidance and an outstanding work ethic and of course musically the guys are on fire! They have released outstanding albums and worked hard to promote them with countless interviews and on the road. Michael in particular is a major talent as singer, guitarist, performer, producer and songwriter and shares with me the vision of working on his output creatively. We will soon see him for new albums with Tracii Guns (SUNBOMB), Nathan James, Joel Hoekstra, Marco Mendoza and Tommy Aldridge (the name of which will be revealed soon), then for an album with Alessandro Del Vecchio, and finally also with SWEET & LYNCH for his third album with George Lynch. I can only admire and thank you and the guys for the trust and the faith they have put in our work. Long live STRYPER!"