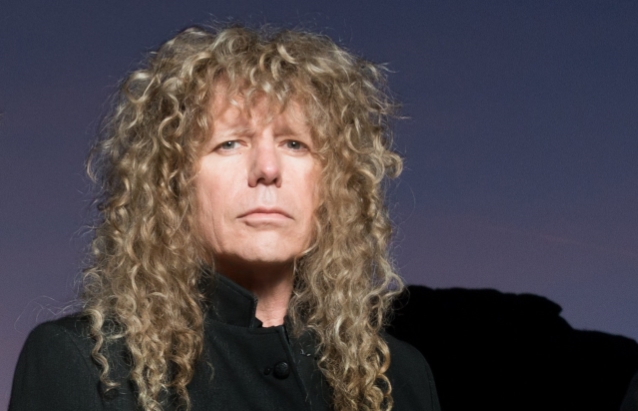 Earlier this month, former FIREHOUSE and current STRYPER bassist Perry Richardson spoke with the "Ouch, You're On My Hair" podcast. The full conversation can be streamed below. A few excerpts follow (as transcribed by BLABBERMOUTH.NET).

Perry: "I'm so excited. I'm leaving on [October 9]. We're going to meet in Nashville and we're going to rehearse for a day, and then head out to get a bus and we'll be gone for about six or seven weeks. The doctors, they're letting him fly and cut his meds back. He's feeling a lot better and he's not so tired anymore, so he's feeling good and he's ready to play. We're so ready. God, I can't wait to get back on stage with him. He's so good."

On the immediate aftermath of Fox's stroke:

Perry: "It was so traumatic. It was overwhelming. We were so shocked. It came, like, two days before we were leaving to do the Australian and Japan run set up. We didn't know what to do. The Australian promoter was begging us, 'You can't cancel this — I'll lose hundreds of thousands of dollars,' and he talked us into doing [the tour] as a three-piece. It was so weird. STRYPER is not a band that should be three-piece. Oz is too integral to that sound. All his dual leads and his vocals are amazing. That boy could be a lead vocalist on his own. God, I missed him so much on that [tour]. Trying to cover some of his vocal parts, it was like a nightmare for me. For everybody, because we were just kind of in shock, going on stage without him. We got through it. It was not as bad as I probably thought it was at the time, but it was definitely different and it was something we needed to do for the promoter. I was kind of glad we did it, but now I know that we don't ever want to do that again."

On whether Fox's health issues have led the band to discuss a potential future without him:

Perry: "No. It's always been positive. That's never come up, trying to think of what if he [doesn't] come back. That never came out of anybody's mouth. We were like, 'Well, we're going to do this, and when we get back, you're going to be back with us.' Howie [Simon] went out and did a few shows and filled in for Oz, and he did a great job, but it's just not the same. That's gigantic shoes to fill. That boy is so good, man. I didn't realize how great... both of those boys are so good. They're such good guitar players; Michael [Sweet] sings his butt off still, and Oz sings so good. I didn't realize... I knew it was great, and they've always been one of my favorite bands, but to be on stage with those guys, it's amazing. You get up there and you realize how really good they are."

On playing with STRYPER:

Perry: "I'm loving being in this band. It's a dream come true for me to step away from rock for 15 years and come back in this way. It's hard for me to put into words how great it is for me, because they were always one of my favorites. I got to open for them. CJ [Snare] and I were in a band called MAXX WARRIOR before FIREHOUSE, and we got to open for STRYPER in 1985 in Charlotte, and that was the highlight of my career up to that time. It was like, 'We're opening for STRYPER — it's like a dream come true.' Now to think that I'm actually playing with those guys, it's the ultimate high for me."

On learning the band's older material:

Perry: "Learning that old stuff was really cool. I just kind of put my twist... the original bass player, Tim [Gaines], played everything with his fingers, and I mostly play with a pick, so it's going to be different in that respect for one thing. Just the way I think is a little different than the way he thinks, so I'll naturally play something different than he would. You might not even notice it in the audience, but if you soloed those bass tracks up, you could tell it'd probably be a lot different. It's just the way I approach stuff... You can't teach an old dog new tricks. That's me, man. I've been doing this my way for so long, if you like it, good. If you don't, I'm not going to be able to change."

On his experiences in the country music industry:

Perry: "To country, I probably brought a little more of the heavy side. I know Trace Adkins didn't really like it as much as Craig Morgan, the other guy I played with. I kind of got him liking the heaviness of it a little bit more. It's hard for me to hold back on stage. I'm banging my head during these ballads. It's pretty funny. I fit a whole lot better in the rock world than I do in the country world."

On whether he'd have any interest in a theoretical reunion with FIREHOUSE to celebrate the 30th anniversary of the release of the band's debut album:

On whether he gets upset when people call FIREHOUSE "hair metal":

On living in Myrtle Beach, South Carolina, which was recently hit hard by Hurricane Florence:

Perry: "I just built a house from the ground up. Designed it myself, drew the plans myself, hired the guy to build it for me, moved in a month ago and just got flooded out last week. It's just heartbreaking. Everything — we had the whole front yard just covered. Furniture and sheet rock, we had to gut everything. You can see all the way through it again, it's so weird. It's killing me. When I first moved to Nashville, I had a house burn down there with everything I had in it, and now I've had one flooded out. It's like, 'I'd better not move to L.A. — the house would get destroyed by an earthquake.' It's hard not to cry, man. Our family's just been devastated over this. We're trudging along and we're going to try and keep smiling and keep moving forward, but it's been a tough two weeks."

Richardson, a founding member of FIREHOUSE, left that band in 2000 and went on to tour with country music artists Craig Morgan and Trace Adkins. He joined STRYPER last October but did not perform on the group's latest album, "God Damn Evil".

Fox suffered a seizure on August 11 while performing with SIN CITY SINNERS at Harrah's in Las Vegas. STRYPER subsequently toured Australia and Japan as a three-piece, and later recruited Howie Simon (Jeff Scott Soto, Graham Bonnet) to fill in during four American concerts in September.