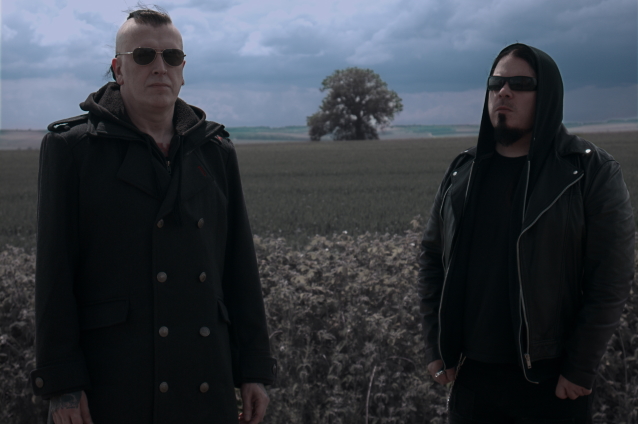 Dead Rhetoric: STRIGOI stems from the ashes of VALLENFYRE. What do you feel is different about STRIGOI?

Chris: "I think, first of all, the primary reason that VALLENFYRE came about in the first place… and the reason that STRIGOI has happened, is that Greg wanted VALLENFYRE to be what it was. Having an avenue to express that side of his musical acumen, without having any sort of initial connotations — that, I think is one of the differences. The other thing is that largely I wrote the lyrics, which he asked me to do. He's a very accomplished lyricist. I'm an enormous fan of VALLENFYRE, which is how he and I met. That was just part of the process that he didn't enjoy as much as doing the music. I think that's a stark difference. I clearly have a different writing style than him. The sound is also a difference. People have been saying it's more cinematic. VALLENFYRE was pushing as far into the crust and ground level as Greg could. With STRIGOI, it's a lot more austere. It is a different concept. When people hear the album and see how it's presented it will make a lot more sense, and the differences will become more obvious. There are still going to be some close approximations, because it's the same guy singing and writing the music. So, there are similar elements there. But as Greg said when it was announced, this is the natural progression, or next step, so to speak. There will be some similarities and differences, because VALLENFYRE was that band, and STRIGOI is this band."

Dead Rhetoric: Being asked to do all of the lyrics — could you talk about the lyrics and where you drew inspiration from for the album?

Chris: "I didn't do them all, but I did the majority of them. There's a song called 'Carved Into The Skin' on the record that is solely Greg. That was the catalyst for what STRIGOI is now. The process was that he gave me a loose idea of the themes — attack organized religion, and we both agreed that there are a number of humanist ideas that run through the album. I despise belief and I despite hypocrisy, and you can find that in all walks of life and in things that people deal with every day. I try to write out real horror. The horror of human existence, for this particular thing and we wanted to keep to that. You can't make it up. What human beings do to other human beings is infinitely more horrific than anything you can make up. Particularly in regards to organized religion. I did an interview the other day where I said that there's been more suffering caused by organized religion than any natural disaster, and I think I'm right in saying that. So, there's those sort of elements. I wanted to leave the lyrics open to interpretation as well. Different people will take different things away from each particular song. There are songs on there in particular that are written from me personally, with a definite standpoint. But I wanted to try and keep it open. That's why I don't tend to use the words 'me' or 'you' or 'I,' because I want it to be more of a third-person commentary on a particular subject matter. So there are elements of religion, politics, mental health, and relationships in whatever guise they might take. It's quite a broad spectrum of negativity, I suppose you could say. [Laughs]"

Dead Rhetoric: One thing that stands out to me with the album is how thick and abrasive it sounds. How important is the guitar tone to an album such as this?

Chris: "It's vital, and I think that's the reason that Greg decided to write and record, and do all of those other elements himself. He had stumbled upon the sound he really wanted, and it was a combination of a number of elements. Same with the bass as well. There was some experimentation until we found where that tone was going to fit in with the guitar in order to make it into this bludgeoning experience that it is. Also, it was considered to not be another HM-2 [guitar pedal] album, even though we love that scene and that sound. There are elements of those pedals on there, but we wanted to push things further. It's a gamble — you want to push your sound to be obnoxious as you can, while being as musical as you can. Some people might like it and some might not, but it really suited the general air of aggression. I was speaking to someone the other day, that it was similar with the lyrics. To try to convey something extreme while showing some elegant restraint as well. That's why there's no bad language on the album. It's the same with the guitar playing. It's bludgeoning while there are some beautiful parts. It's designed to make the listener uneasy and transport them. It's meant to be an experience."

You can read the entire chat at this location.

STRIGOI's debut album, "Abandon All Faith", was released on November 22 via Nuclear Blast.