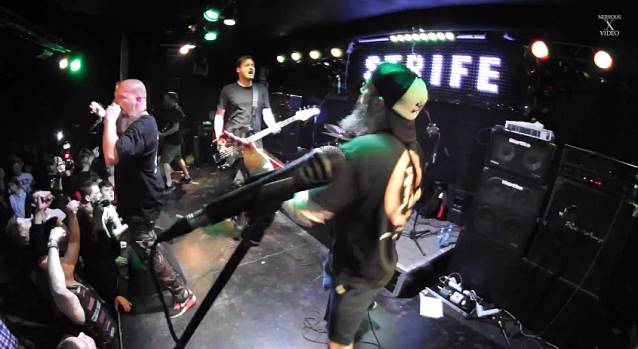 Video footage of of the Southern California hardcore band STRIFE performing on January 28 at Plan B in Moscow, Russia can be seen below.

Some bands leave such an impression on fans that, even after two decades, their sound still resonates deep and wide. STRIFE is just such a band, having once again tapped into the energy that has kept listeners interested for more than 20 years.

After touring throughout the world in recent years, STRIFE decided it was time to unleash a new batch of songs and break their 11-year streak of recording silence. The groundwork for what would become their newest album, "Witness A Rebirth", had been laid and their collective efforts began down the road to realization.

With producer Nick Jett (TERROR, ROTTING OUT, BACKTRACK) at the helm, STRIFE recruited friend and previous collaborator Igor Cavalera (founding member of SEPULTURA) to perform drums for the album and traveled to Brazil to start the recording process with him. Soon after, they returned to California and put the rest of the pieces into place, including guest vocals by Billy Graziadei (of BIOHAZARD) and Scott Vogel (of TERROR), plus a guitar solo by Marc Rizzo (of SOULFLY). The result serves as a testament to their talent, bridging their past (especially the highly acclaimed album "In This Defiance", with which this album shares four-fifths of the members) with a more contemporary hardcore sound. "Witness A Rebirth" is at once both refreshing and evocative.