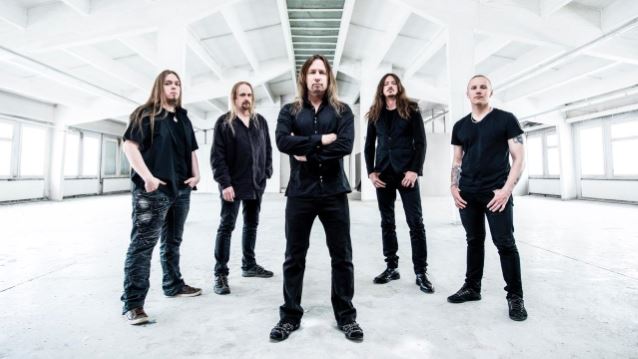 STRATOVARIUS is one of the most influential, successful and enduring power metal bands in the world; one of the top names thanks to their distinguished mix of fast progressive metal and a melodic approach to melodies.

What started in 1985 under the name BLACK WATER and left a trail of 16 studio albums and ten Top 5 chart positions in their native country Finland (and more than 40 top chart positions all around the globe), found — after a few bumpy steps and stones in the band's lineup — its peak in STRATOVARIUS's recent studio works "Elysium", "Nemesis" and "Eternal" — all milestones in sound, creativity and songwriting.

It happens rarely nowadays, especially in metal, that a band creates one magic song after the other. STRATOVARIUS is one of the few exceptions. 29 of those exceptions (and there could have been more!) can be found on STRATOVARIUS's longest and greatest "Best Of", which is going to be released on May 6 via earMUSIC.

The "Best Of" is going to be released as 2CD standard edition, digital and as 3CD limited edition in a high-quality packaging, including the exclusive 60-minute bonus CD "Live At Wacken 2015". Both editions include liner notes written by exceptional keyboardist Jens Johansson as well as rare picture material from the band's private archive.

As a special treat, the "Best Of" includes the brand new song "Until The End Of Days" from the current band lineup consisting of Timo Kotipelto, Jens Johansson, Mattias Kupainen, Lauri Porra and Rolf Pilve.

All hand-picked by the band and adding up to two and a half hours of pure STRATOVARIUS bliss, the songs give metal fans and those to be a great selection on the band's impressive work, including classics such as "Black Diamond", "Hunting High And Low" and "Speed Of Light" as well as more recent material such as the most streamed song in the band's history "Unbreakable" and "Shine In The Dark" from their recent studio album "Eternal".

All songs have been remastered by the band's longtime companion Mika Jussila of Finnvox Studios.

Jens Johansson explains: "It's been twenty years since the 'Episode' album, we're all getting older but this stuff sounds as fresh as ever. Could it be that STRATOVARIUS has discovered the fountain of Eternal Youth!? You may feel younger, but we can't actually (legally) promise you'll be younger after listening to this best-of album, but we can guarantee one thing: when you put it through your speakers, it will play 'Until the End of Days'!! To me, it's a testament to the fact that paying attention to songwriting and production was expensive, but so worth it. The songs, the sound and the performances really have stood the test of time."

Timo Kotipelto adds: "Wow! 20 years in STRATOVARIUS have passed at the speed of light! I still remember when I joined the band and was happy to do some power metal. And I am very happy to still be able to do it after all these years! This collection of songs is an excellent selections and a cool way to remember the history of the band from the past to the present! I hope you will enjoy it as much as we did while selecting the songs. Rock the metal!"

The whole STRATOVARIUS catalogue will be re-released throughout 2016 and 2017, including extensive booklets and a lot of bonus material.

CD3 - Live At Wacken 2015 (only available on limited edition)