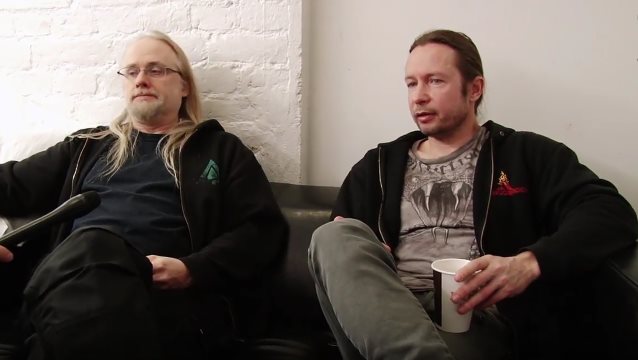 Wave TV conducted an interview with vocalist Timo Kotipelto and keyboardist Jens Johansson of Finnish/Swedish melodic metallers STRATOVARIUS prior to the band's November 19, 2016 show at Pakkahuone in Tampere, Finland where they were playing their 1996 "Episode" album in its entirety. You can watch the full chat below. A few excerpts follow (transcribed by BLABBERMOUTH.NET).

On playing "Episode" in full:

Jens: "It was the anniversary, 20 years since it was released. It was because of that, like, 'Oh, we should do something!"

Timo: "A couple of years ago, we played the whole 'Visions' album. The feedback from the fans was super-good. And then we were thinking, 'Okay, 'Episode' is coming up on its 20th anniversary. Why not play it?' At least to me, it was more challenging as an album. It's more progressive compared to our new stuff. It's been so much fun to play this album."

On the recent trend of bands playing their classic albums in full live:

Timo: "Actually it's not a duty. It's a pleasure. When this idea came up last spring, then at least I didn't remember it was going to be the 20th anniversary for 'Episode'. I decided myself I would be up for playing this. Then later on, somebody said, 'That's a good idea. It's going to be 20 years.' It wasn't like we needed to do it."

On whether playing their older material is more challenging than their more recent material:

Jens: "I don't think so. Some of the songs we have never played live. Everybody had to learn them, in a way. I think also the only challenge is that when you make an album, it's not exactly meant to be played in its entirety live, so I think you make an album sort of like it's meant to be listened to at home. This album has quite a lot of slower songs and epic songs, so we tried fiddling around with the sequence a little bit. We don't play an album in sequence of how it was released. Other than that, it's great. There's some really nice songs."

Timo: "This album, to me, is probably one of the most challenging to sing. I think Matias [Kupiainen, guitar] told me yesterday that he counted all of the super-high vocals and 'Episode' has more super-high-pitched vocals compared to any of our other albums. Then I was like, 'No wonder I have been feeling like shit!' There are some songs that go super-high, but when I listen to these songs that we haven't been playing live for many years, there's one song we've never played live before, so we went back 20 years almost, to listen to them, there was a nice surprise. I was like, 'Oh, wow, these songs are pretty good!' They're almost fresh to me. Every time you make an album, you recall the album when you were working on the songs. Then when it comes out, you are already bored, like, 'I don't want to hear these songs anymore.' Or, 'There's a five-week European tour coming up.' But now it's like, 'These songs are great!'"

Jens: "We recorded the next album ['Visions'] very soon after this. We never had time to play a lot of gigs with these songs. We went into the studio right away and made the next one. There was not so much time to reflect on this album. We just recorded it and did a new one."

On the band's thoughts on doing cover songs:

Timo: "We did record some individual cover songs ten or fifteen years ago because the label requested them. To me, it's a problem because the original is always the original. You can't make it better. You can make it different, but then if there's no proper input from the band and you can actually make something nice out of the songs, then it doesn't make any sense."

Jens: "If somebody came up with a great idea, but it's more often when people do this, they want to put an album out without having to write songs. It's a clever way of making an album without having to write anything. You make a cover album. 'Great success! New album out? We didn't have to write anything.' It's very simple, but I don't know… We should focus on making a proper album."

"Episode" was released in April of 1996 by T&T/Noise and was the first STRATOVARIUS album to feature Johansson, who previously played with Yngwie Malmsteen and DIO, among others.

STRATOVARIUS's most recent studio album, "Eternal" was released in 2015 via earMUSIC.