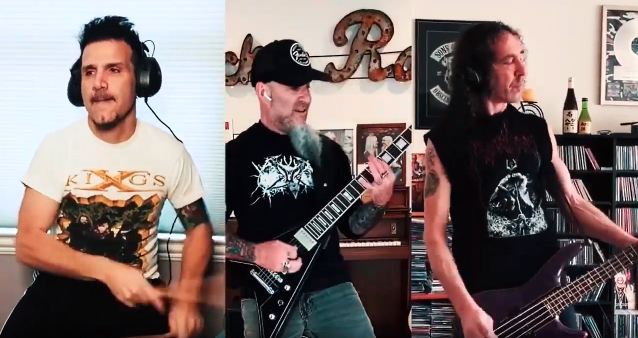 Charlie Benante (ANTHRAX), Scott Ian (ANTHRAX) and Dan Lilker (NUCLEAR ASSAULT, ex-ANTHRAX) have shared a "quarantine version" of the STORMTROOPERS OF DEATH instrumental song "March Of The S.O.D.", recorded with each member separated in their own homes.

Benante uploaded a video of the performance to his YouTube channel, writing in an accompanying message: "A message from Sgt. D — Quaran-fuckin-tine or you’re on my list. You're welcome, Sgt. D"

Sgt. D was the mascot of the satirical 1980s metal band STORMTROOPERS OF DEATH (a.k.a. S.O.D.), which consisted of Ian (guitar), Benante (drums), Lilker (bass) and M.O.D.'s Billy Milano (vocals).