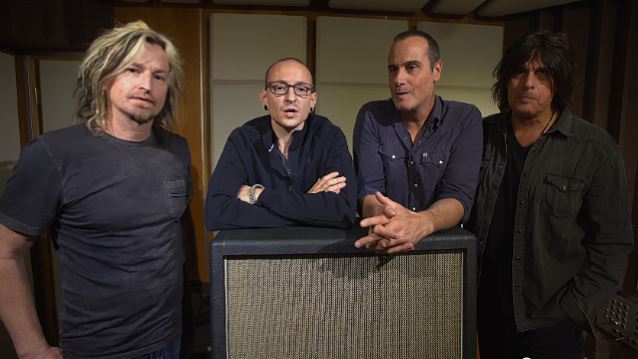 According to The Pulse Of Radio, STONE TEMPLE PILOTS have finally been able to drop the added "With Chester Bennington" from their name after settling their legal issues with former singer Scott Weiland. The band began working with Bennington in May 2013 after firing Weiland three months earlier, but an exchange of lawsuits over, among other things, the use of the band name was part of the reason why the "Chester Bennington" clause was tacked on for a while.

No one is more excited about the news that Bennington himself, who told AltWire, "It'll be fun to go out as just STONE TEMPLE PILOTS. [Laughs] That's exciting, because it really bothered me to see 'STONE TEMPLE PILOTS with Chester Bennington.' So I'm glad that's gone and glad that that's over."

STONE TEMPLE PILOTS has been working on a new album, and Bennington was asked how it compares to his debut with the band, the 2013 EP "High Rise". He explained, "I think it's a lot different. I really don't like talking about music that people aren't hearing because it's hard to describe what the music sounds like, but it's super energetic. The riffs are really cool and the playing has been really insane."

Bennington told The Pulse Of Radio that STONE TEMPLE PILOTS has a lot of flexibility these days about when and how it can release new music. "There are a few things working in our favor," he said. "One is that we're independent and that we can kind of release music whenever the hell we feel like it, you know. If we went in the studio today and recorded a song, and it was finished, we can get it mixed and mastered and put that out as our next single. That being said, like, we have our eyes focused very, very keenly on taking as much advantage of the time that we have together as we can and being as productive in that time as we can, and then making the most out of what we produce."

The singer also said he's recovering but "still pretty sore" from a leg injury he suffered onstage with his main band, LINKIN PARK, which led the band to cancel most of its North American tour.

He plans to be ready for April 8, when STONE TEMPLE PILOTS kicks off a U.S. tour in Seattle.