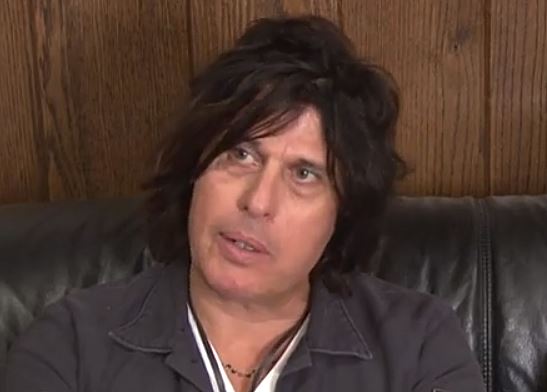 Steven Rosen of Ultimate-Guitar.com recently conducted an interview with STONE TEMPLE PILOTS guitarist Dean DeLeo. A couple of excerpts from the chat follow below.

Ultimate-Guitar.com: Did you come to the realization a long time ago that either Scott Weiland had to get it together or it was going to end?

Dean DeLeo: I think everyone did whatever they could. I'm talking wives, brothers, friends and everyone.

Ultimate-Guitar.com: It was very sad because you made some remarkable records with Scott. He was truly a great singer and lyricist.

Dean DeLeo: He absolutely was, man. His lyrics were (amazing). In my humble opinion and it's easy for me to be biased. Everything he brought forth when we were all kind of running on all pistons per se — and that didn't really last very long — but when we were up and runnin', I don't think there was anybody better, man.

Ultimate-Guitar.com: How long did STP run on all pistons?

Dean DeLeo: Well, the first record went off without a hitch. [laughs]

Ultimate-Guitar.com: It started to unravel that long ago?

Ultimate-Guitar.com: Ultimately Scott Weiland leaves the band and you're thinking, "What do we do now? Call Chester Bennington?"

Dean DeLeo: Look, man, that's not an easy position to fill. I've come to terms long ago — I'm merely the guy that stands next to the singer. [laughs]

Ultimate-Guitar.com: And the guy who writes all the songs.

Dean DeLeo: Well, along with Robert. A lot of people don't know because they deem me as the guitar player but Robert's responsible for really the band's biggest songs. Robert wrote "Plush" and my brother is an incredible guitar player. He wrote everything on "Interstate Love Song" but the lyrics. He wrote that melody, that guitar line and the bass line and he may have even come up with the beat. I can't say enough about him — he's an extraordinary musician.

Ultimate-Guitar.com: You obviously have a lot of respect for your brother.

Dean DeLeo: When I come into a session it's kinda like where I need to be or I try to be. I wonder what Robert's gonna bring in and I gotta be like, "OK, well I know it's gonna be really great so I gotta be as good as that or beat it if I'm gonna have any songs on the record." So um, sorry, I got sidetracked with the question. [laughs]

Ultimate-Guitar.com: I had asked you about Chester and what you were feeling when Scott left.

Dean DeLeo: Oh, right. I dunno, man. It really wasn't talked about much. When we kinda came to the rude, rude reality that it couldn't go on the way it was, there was no one talked about. We really weren't in that place. Like we didn't really discuss it; there was nothing discussed. It was just we knew things couldn't go the way they were. That's what we did know.

Ultimate-Guitar.com: When was Chester's name first brought up?

Dean DeLeo: One day I just said, "I think Chester is the person to do this." Immediately Robert and I are going, "That is amazing."