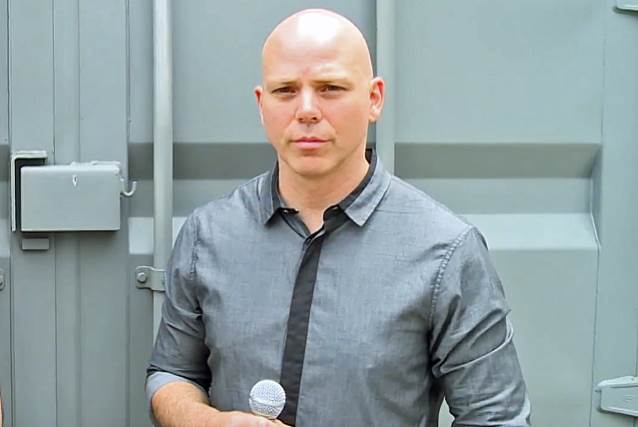 HardDrive Radio's Lou Brutus conducted an interview with STONE SOUR guitarist Josh Rand during this past weekend's Rock On The Range festival in Columbus, Ohio. You can now watch the chat below.

Speaking about the treatment he received earlier this year for "an alcohol and Xanax dependency," Rand said: "Everything, for me, basically came to a head when we did ShipRocked [in January]. I was prescribed a bunch of stuff, and, really, that's the main thing that I needed to break away from. I didn't really start drinking until the last year and a half, but the problem is when you mix that with prescription drugs. And it really just sent me in a downward spiral and into a depression where I really didn't even get out of my bunk unless I had to and I was kind of forced to. And I just, one day, just decided… I was, like, 'I feel terrible. I've gotta do something about that.' And I just made the decision on our way to Canada, which was not easy. Literally, we were in a connection to get up there, and I just decided that I needed to go home and get stuff sorted. 'Cause, as I said, I just hit this wall where I just was in a funk and I knew that there was more to life than feeling the way that I did. [I thought,] 'I have all these positive things; I shouldn't feel the way that I do.' Then I definitely went home and worked on that, with the support of the band and family and everything. I mean, I have a great support group; I'm very, very lucky. But the great thing is, when I came back, honestly, I have that energy of like it being 2002 all over; it's like this whole rebirth for me and stuff. So it's been an amazing couple of weeks for me coming back."

Asked how he is filling the time on the road now that he is clean and sober, Josh said: "Right now I'm a workout maniac. [Laughs] Everybody thinks I'm crazy. I've been working out two times a day. I'll go down and I'll spend two hours in the gym in the daytime, and then sometimes, depending on how I feel after the show, I'll go and I'll powerwalk for another hour or an hour and a half. But that's how I've just been keeping busy, and I feel better. As I said, one of the main reasons [for me wanting to get clean] is I just felt terrible — physically and mentally, [I felt] just tired. And since I've started working out and gotten off everything, I feel like a new person."

Rand told the Des Moines, Iowa radio station Lazer 103.3 that he was first prescribed Xanax eight years ago for anxiety related to flying. He said: "And then over the course of the last couple years I started drinking and when we started touring, I was basically day-drinking. But not drinking to get messed up, but just to maintain, I guess. Or to be able to cope, to have this buzz."

STONE SOUR is touring in support of its sixth studio effort, "Hydrograd", which came out last June and features the chart-topping rock radio hit "Song #3".

The band will support Ozzy Osbourne on the initial North American leg of the legendary vocalist's "No More Tours 2" tour, which kicks off August 30 in Allentown, Pennsylvania.