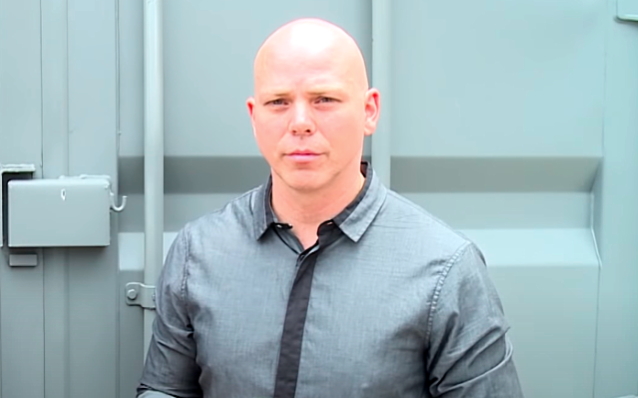 STONE SOUR guitarist Josh Rand has confirmed to the "Behind The Vinyl" podcast that he is working on a new solo project. "As of right now, I have 12 songs musically done," he said (hear audio below). "Right now I'm looking at vocalists — different vocalists."

Regarding the musical direction of his new solo material, Josh said: "It definitely is different than what I think most people would expect. I decided if I was gonna do anything that I wanted it not to sound like STONE SOUR 'cause it's going to, to some degree. So, a lot of it, half of these songs… I started playing — I shouldn't say I started playing piano. I know how to edit a mini-piano, so I'm a great piano player now… But a lot of 'em are piano-based, and I'm running with it like that. And I've also started incorporating all these different instruments — all kinds of crazy percussion and stuff. 'Cause I just wanted to have fun and be creative and not try to write the next '30/30-150' or have that pressure of trying to do that. So I'm just kind of running with it, and that's where I'm at."

According to Josh, he is taking his time putting ideas together, with the hopes of being able to make some kind of an announcement before the end of the of year.

"I'm off to a great start, I feel like, and so does the management and the label; everybody's really liking the music," he said. "But till we actually put a voice on it… I'm looking at [various singers] right now — basically, they're auditioning — and then we'll go from there."

Rand recently said that he has "no idea" when STONE SOUR will release a new studio album. Asked in an interview with Guitar World if the band has started working yet on a follow-up to 2017's "Hydrograd", Rand replied: "To be honest, the band is on hiatus right now with no timetable on a return. It's a mixture of needing a break, plus Corey [Taylor, vocals] wants to do a solo album, so I don't know when there will be new STONE SOUR music."

STONE SOUR has been off the road and out of sight since completing the touring cycle for its 2017 LP "Hydrograd". Taylor has been working with SLIPKNOT since then, recording and touring behind that group's sixth effort, "We Are Not Your Kind". Rand has been promoting STONE SOUR's new live album, "Hello, You Bastards: Live In Reno", which came out in December.

Taylor recently told WhatCulture that he has already written 26 songs for his long-in-the-works solo album, which he has hinted at recording over the years.