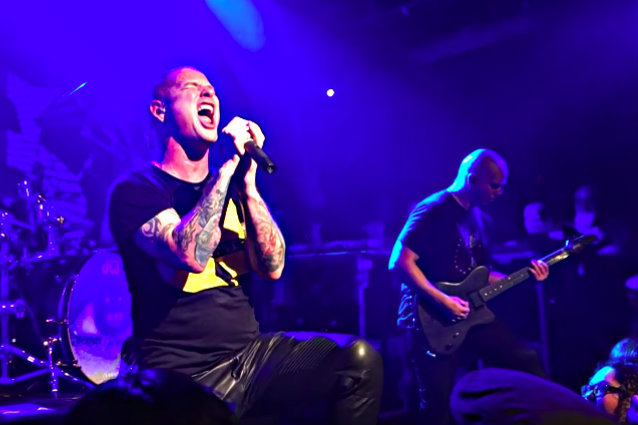 STONE SOUR has released a 360-degree performance video of the song "Taipei Person/Allah Tea", filmed live on June 29 at The Troubadour in Hollywood, California. Check it out below.

"Taipei Person/Allah Tea" is taken from STONE SOUR's latest album, "Hydrograd", which was released on June 30 via Roadrunner Records. The disc was recorded at Sphere Studios in North Hollywood, California with producer Jay Ruston, who has previously worked with ANTHRAX and STEEL PANTHER. The band tracked the album live in the studio, cutting a total of eighteen songs from which fifteen made the CD.

STONE SOUR singer Corey Taylor confirmed in a recent interview that the band has begun working on material for the follow-up to "Hydrograd". "We've already been writing some stuff, and it's actually kind of… It looks like it's darker — [there are] some really cool, darker ideas," he said.

During the same chat, Taylor said that he was still overjoyed at how "Hydrograd" turned out, less than six months following the LP's release.

"To me, not only do I think it's the best work that we've ever done, but I also feel like we could put this album up against anybody, and not only would we stand our own, we would beat a lot of the shit that's out there, just because of talent, content, quality, everything — everything," he continued. "Even if this album hadn't sold well, which it did, I would still put this up against anything because of how proud I am of it."

STONE SOUR recently announced a new North American tour for early 2018. The new dates include a co-headline tour with HALESTORM and special guests THE DEAD DEADS, set to commence on January 27 in Abbotsford, British Columbia, followed by a string of headline shows with support from RED SUN RISING and THE DEAD DEADS, which get underway February 16 in Grand Rapids, Michigan.