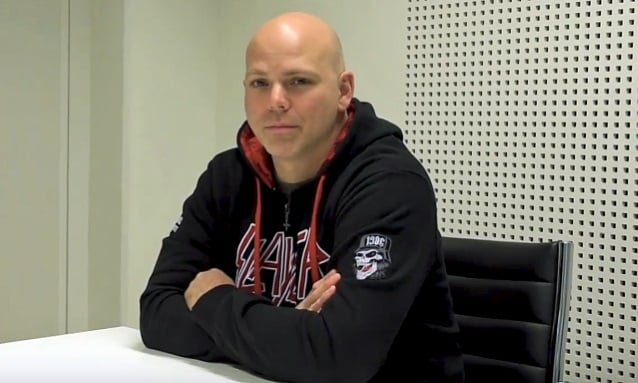 Hughes & Kettner conducted an interview with STONE SOUR guitarist Josh Rand prior to the group's November 26 show in Luxembourg. The full conversation can be seen below. A few excerpts follow (as transcribed by BLABBERMOUTH.NET):

On the band's continued growth:

Josh: "It's been an amazing fall tour for us over here. It's been a while since we've been here, so the reception — we've been gone for four years — has been overwhelming in a pleasant way. To come back and play, where we played the club before and now we're playing a place that seats four times as many people and it's sold out, it's pretty crazy, especially this far in our career. We've been doing it for 17 years, and now, this album, for whatever reason, it's really drawing people in. We're always going to have our core audience, but it's, like, we're growing. The band has consistently gotten bigger every album we've put out. For that, I'm very grateful.

"We've always evolved, and our fans have kind of grown with us growing — not only as musicians and artists, but as just people. I think we've always done records that we 100% backed as far as the creativity side of it. We've never painted ourselves in a corner, even from the first album, which has allowed us the freedom to create whatever we want, and I think that by doing so, there's an honesty that I think that you hear in the records. The main thing, though, is I just think our audience has grown with us. Every record is a progression of the previous one, and we're not a band that puts out the same record over and over again. I think there's just a maturity over time, just like if you do in any industry or profession. The more you do it, the more comfortable that you become with it."

On the band's approach to recording their latest album, "Hydrograd":

Josh: "We got into one big room and just jammed the songs out, which nowadays, is unheard of. Everybody tracks individually, and it's about being perfect. For us, we're not an extreme metal band — we're a rock and roll band, so we don't need to be perfect and precise and accurate. We just got into one big room and banged out the songs, and I think that you hear that in this latest record. The way we recorded it, it was really pretty punk rock to a degree. I'm proud — not many bands do that anymore. It's kind of a lost art, of everybody playing together as a band. We just wanted stuff to breathe and not be locked into a grid."

On what a Josh Rand solo record would sound like:

Josh: "It'd sound like the heavier side of STONE SOUR. [Laughs] I don't know. I think on this next record, and I've already messed around with a couple ideas, that I'll introduce a couple more heavier songs with drop-tuning again. This record, we didn't really have any of those songs — it's all pretty much E-flat and C-sharp. There might be some influence from the first record on the stuff that I write, but now just taking that influence and that style, but adding the maturity that I have over the years to it."

Josh: "Eventually, obviously, we'll have the break, and Corey [Taylor] will return to SLIPKNOT. When that happens, we'll loosely write for the next record over those two years or whatever it ends up being, but there's been talk of us continuing the 'Burbank' cover series, so maybe one or two of those will come out in that time period. The great thing about having those breaks is it's a chance to recharge and get excited about recording. Over the years, everybody always asks me, 'What do you think about the breaks, honestly?' To be quite honest, I actually at this point completely embrace it. I think that's one of the reasons why we have the longevity that we've had. I think when a band gets thrown in and it's just tour, record, right back out, and it's just that process over and over and over again, that's what makes bands break up and causes problems. I think us having those breaks and being able to come back to it, it's like being a new band all over again every time that you do it. Everybody's had a break from one another — not only from the band side, but you have to realize, it's like family. Just like family, at times you get sick of one another. That's just the honest-to-God's truth. To have that two years off and then just to get together here and there to work on the covers or new record, I think is huge."

On whether he thinks STONE SOUR could last for another ten or twenty years:

Josh: "I don't see why it couldn't. It's grown tremendously over the last four years with us not really even doing anything. I think we can go as long as we really want to, or until it runs its course. Right now, I don't see an end to it."

STONE SOUR recently released a 360-degree performance video of the song "Taipei Person/Allah Tea", filmed live on June 29 at The Troubadour in Hollywood, California. Check it out below. The track is taken from "Hydrograd", which was released on June 30 via Roadrunner Records. The disc was recorded at Sphere Studios in North Hollywood, California with producer Jay Ruston, who has previously worked with ANTHRAX and STEEL PANTHER.