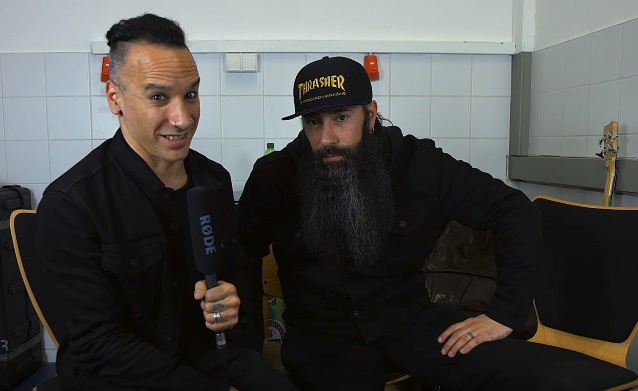 Germany's Grasser Production recently conducted an interview with STONE SOUR bassist Johny Chow and drummer Roy Mayorga. The full chat can be seen below. A few excerpts follow (as transcribed by BLABBERMOUTH.NET):

On the group's latest album, "Hydrograd":

Johny: "STONE SOUR takes decent amount of breaks because of Corey [Taylor, vocals] doing SLIPKNOT, so you get antsy. Then you finally get in the studio, and it's amazing, because you finally see this come to fruition after years of working on stuff."

Roy: "We got together here and there a couple times throughout the year when Corey would have a break. We'd write songs together and just e-mail them to each other and put them together that way. Then we'd get together and play these songs for real, and record them in my house and then elaborate from there, live with them for a little while and watch them grow."

Johny: "The cool thing is that everybody in the band wrote. Everybody, pulling from everybody's different backgrounds. Roy and I and [Christian Martucci, guitarist] all come from that East Coast, New York punk rock/hardcore scene. It was easy for us to gel a lot of our music together — riffs, ideas, whatever they may be, as well as Josh [Rand] and Corey. Everybody wrote, and everybody had a part in everybody else's parts too. It was a group effort."

Roy: "Everybody had a hand in taking a song apart and putting it back together, so that way, every song has a cohesiveness to it. If I brought a song in or Chow brought a song in, at the end of the day, we all put our ingredients into it, and then it turns into a STONE SOUR song."

Johny: "It was great to walk out of Sphere Studios knowing that we all just created something [special]. It was a really proud moment for me. I've recorded quite a few albums, but this album was one that really felt great because we all put in — we all sat in the studio recording it together at the same time, not sitting there to a grid [going], 'Okay, it's your turn, then it's my turn, and then it's their turn.' It was everybody together all at once, and that was really great to be able to feel that kind of energy exchanged."

On whether it was a difficult transition from Jim Root, who left the band in 2014, to Martucci:

Roy: "I knew Christian from when I was living in New York, and met him at one of the clubs I used to work at, and then kind of found each other in L.A. when we both moved there at the same time. We didn't see each other for a few years before that and ran into each other at some bar somewhere, and [we've] been hanging out ever since."

STONE SOUR recently released a 360-degree performance video of the song "Taipei Person/Allah Tea", filmed live on June 29 at The Troubadour in Hollywood, California. The track is taken from "Hydrograd", which was released on June 30 via Roadrunner Records. The disc was recorded at Sphere Studios in North Hollywood, California with producer Jay Ruston, who has previously worked with ANTHRAX and STEEL PANTHER.

Taylor confirmed in a recent interview that the band has begun working on material for the follow-up to "Hydrograd".