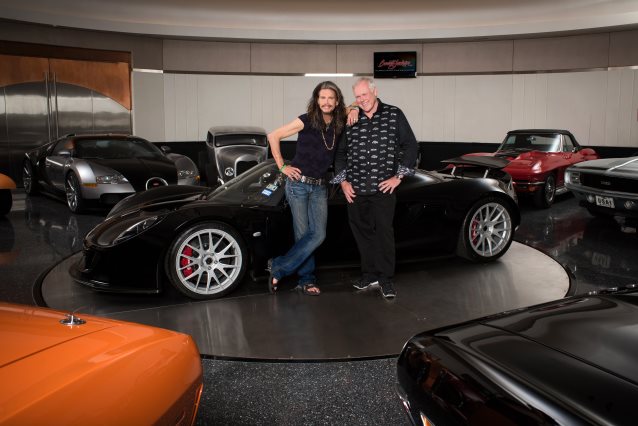 The World's Greatest Collector Car Auctions will auction a Hennessey Venom GT Spyder owned by rock and roll legend Steven Tyler at its 46th annual Scottsdale Auction in January 2017. The supercar will also be on display at the 2016 SEMA Show in Barrett-Jackson's booth, November 1-4.

This rare supercar is the fifth of only 12 Hennessey Venom GTs ever created and first of the Spyder convertibles. It will cross the auction block at No Reserve, with 100 percent of the hammer price benefiting Janie's Fund, an initiative created in partnership with Tyler and Youth Villages to bring hope and healing for many of the country's most vulnerable girls who have suffered the trauma of abuse and neglect.

"Charity car sales create some of the most memorable moments from our Scottsdale auctions," said Craig Jackson, chairman and CEO of Barrett-Jackson. "This past January, we had the VIN #001 Acura NSX, benefiting the Pediatric Brain Tumor Foundation and Camp Southern Ground, and last year we sold the VIN #001 Ford GT350R with the entire hammer price going to support the Juvenile Diabetes Research Foundation. A world-renowned celebrity like Steven Tyler donating a car as rare and desirable as the Hennessey Venom GT Spyder will undoubtedly be the next great moment for charity cars in Scottsdale, and I'm proud that Barrett-Jackson can be a platform to support a wonderful cause like Janie's Fund."

Tyler's Venom GT Spyder is the convertible version of the record-setting Venom GT that recorded a top speed of 270.49 mph at Kennedy Space Center in 2014. This specific vehicle belonging to Tyler is the first of the six Spyder convertibles produced. The 7.0-liter V8 engine produces 1,244 horsepower that muscles the 2,743-pound convertible from 0-60 mph in 2.7 seconds and 0-200 mph in 14.5 seconds. This car also has a custom JL Audio stereo system befitting a rock and roll superstar.

For more information on becoming a bidder, click here.