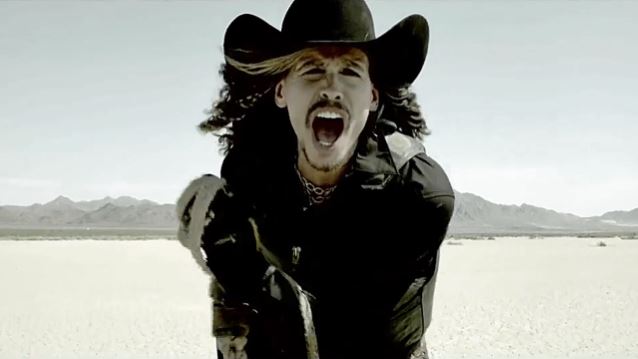 AEROSMITH frontman Steven Tyler's new song "Hold On (Won't Let Go)" has been named the new anthem for the Colorado-based bull riding organization Professional Bull Riders' CBS television broadcasts and live events. The track is featured on Tyler's debut solo album, "We're All Somebody From Somewhere", which is being released today (Friday, July 15) via Dot Records, underneath the Big Machine Label Group umbrella.

"Hold On (Won't Let Go)" will open PBR broadcasts on CBS Sports and CBS Sports Networks. It will also play at live events and be part of PBR's advertising/marketing campaigns, including a new social media effort starting Friday.

"It's a stand-out moment for our sport and we couldn't be more honored," said Professional Bull Riders CEO Sean Gleason in a statement. "'Hold On (Won't Let Go)' is the quintessential PBR anthem."

"Steven Tyler," Gleason added, "captures the essence of PBR like no other artist or song could."

"Hold On (Won't Let Go)" was written by Tyler along with five-time Grammy Award-winning songwriter Poo Bear and Jared Gutstadt, who has collaborated with Brad Paisley, LYNYRD SKYNYRD, Dierks Bentley and others, and produced by nine-time Grammy Award winner T Bone Burnett.