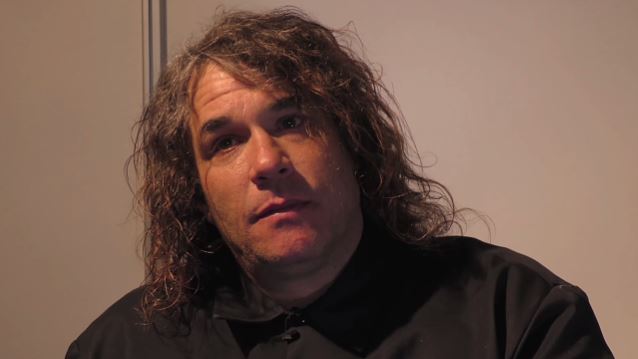 EXODUS frontman Steve "Zetro" Souza was interviewed by rock journalist Mitch Lafon for a recent edition of the "One On One With Mitch Lafon" podcast (Facebook page). You can now listen to the chat using the Spreaker widget below. A couple of excerpts follow (transcribed by BLABBERMOUTH.NET).

On the bad blood surrounding his departure from EXODUS in 2004, and his return to the group ten years later:

"I think my deal with the band and the things that went on are out of hurtfulness, from the way that I carried myself. The way that I left in 2004 is not the way you should do things, and I take full responsibility for that. And I don't blame those guys for being angry at me all those years for the way that went down, and [for being] hesitant to bring me back. I could understand that. They don't want that guy. Who wants a guy who's not into it being on the road? It's the worst feeling ever. Everybody's gotta be down and into it, and I wasn't; there was other things going on that I had to take care of. Which leads me to now, which I don't have any of those things anymore. It's all about the band; it's number one. So when I was given the opportunity to audition again for EXODUS, I knew how I was going to approach everything this time around, and that's everything. And so, it starts with myself. Everything starts with yourself. You can point the finger at everybody and go, 'Woe is me,' but you start with yourself and work your way out. What can I be? How can I be? I refuse to have an argument with anybody in the band. I refuse to go in that type of mentality anymore; there's no reason for it. We're much older, much wiser. And so I carry myself with the fans, with the press, with the band — with everybody — like… I'm very fortunate to get to do this. I'm very fortunate, after thirty years, to still be relevant. I'm very fortunate to play in a band that's revered by so many people. And it's so hard to make it in this business, let alone have all those things. Why take 'em for granted, for whatever reason? So I am fully… Every bit of… The band, the crews, the fans, the photographers, the journalists, anybody who has a piece of it… the publicists… I wanna make it a great experience for everyone from myself. Regardless of whether anybody else does it, or bands don't carry themselves like that, I do, and I will always be that way, and I don't see myself changing ever for that. To me, that's the way I wanna be, and I wanna be remembered.

"I think the way it went down in 2004 is I had another responsibility I needed to take care of. You don't have children in life and have somebody else bring them up or whatever. I chose to have those children, and it was my responsibility to make sure that they're productive members of the society. So those years that I was out — ten years — even though I was doing DDP [DUBLIN DEATH PATROL] and TENET and HATRIOT and all these other little projects, I was taking care of what needed to be taken care of, that I had brought on myself. Now, those are all out and have been gone for awhile. So, again, when it came back to me, I embraced it fully, took none of it for granted whatsoever. So that's why I think I'm really more immersed into it now than ever, and I do realize what it is that I have, and what I had, and that I don't want it to go anywhere this time. And that I'm fully committed to this for the duration and the long haul and that I'm not going anywhere. And the way to do that is to show how involved I am from every aspect of it. And my life is immersed in this. EXODUS is now number one again. Music is now number one again. Don't stand in the way of it, [or] it'll run you over. I think that that's where it was in the '80s, and it's back to that point again."

On whether EXODUS has commenced writing the follow-up to 2014's "Blood In Blood Out".

"We haven't even looked at that yet. We're still very much pleased with being able to tour on 'Blood In Blood Out'. It's now just been a year that the album is out, and I think we still have so much shelf life on this record left. We have a full States tour with KING DIAMOND booked, South America, two times in Europe. So things are going really well for this record cycle. And I think that that's a credit to the music that was written and the performances by everyone. But we've also gotta look at the fact that one of our guys [guitarist Gary Holt] also plays in another band [SLAYER] that just released a new record ['Repentless']. And he is probably the main songwriter [in EXODUS]. So we haven't really all got down and talked about it, 'cause there's still a lot to do. But I would think, personally, that by the end of 2016, we need to start writing songs then."

On how EXODUS fits touring around Gary Holt's SLAYER schedule:

"We have another guy [filling in for Gary]. Kragen Lum [HEATHEN] is Gary's stunt double. And we use Kragen. You can't look at any person being bigger than the entity itself. EXODUS still needs to work and carry on as well, and Gary knows that; we have his full blessing from it. So that's why we bring Kragen in, and we don't even hesitate. We just book it. If Gary can make it, great. If not, Kragen will come in and do it. And it's understood by the fans; they get it. I like Gary being in both bands, so I think that it works out great that way for everyone."

On whether it's possible EXODUS will make an album without Gary Holt being involved:

"No. Definitely not. Gary is EXODUS. He's the only one that's been on every single record. Gary writes most of the lyrics and the music. He is EXODUS personified. So that would be blasphemous and a sacrilege to do it without him. It's still his band — very much so."

"Of course we [want to get around to making another album at some point]. And we're not done yet. But I think everyone thinks in the now, so we're still touring on 'Blood In Blood Out', and we'll have to see what happens in there. But everybody fully knows what it entails and what we have to do, what each of us have to do. It wasn't like, 'Well, let's bring Zet. We'll do one last tenth record and see what happens.' I mean, you've always gotta keep writing new music and always keep fresh, I think. It's part of the progression, and it's what makes a band stay tight and stay hungry — to write new music, new good music, and I've always felt that way."

On what his involvement will be in the songwriting process for the next EXODUS album:

"Well, like I always was in the past with EXODUS — I very much was involved in the writing. I'm a lyrical writer; people know that. I mean, I write all the HATRIOT stuff, I wrote all the DDP stuff. I've written stuff on the last two TESTAMENT records and I've already written four [songs[ for the new [TESTAMENT record]. So I'm a lyrical guy. I write."

"Blood In Blood Out" sold around 8,800 copies in the United States in its first week of release to debut at position No. 38 on The Billboard 200 chart. Released in North America on October 14, 2014 via Nuclear Blast, the CD art was illustrated by Swedish artist Pär Olofsson, known worldwide for his incredible renderings that have graced the covers of countless heavy metal albums, including EXODUS' "Let There Be Blood".

"Blood In Blood Out" is EXODUS' first album since the departure of the band's lead singer of nine years, Rob Dukes, and the return of Souza, who previously fronted EXODUS from 1986 to 1993 and from 2002 to 2004.