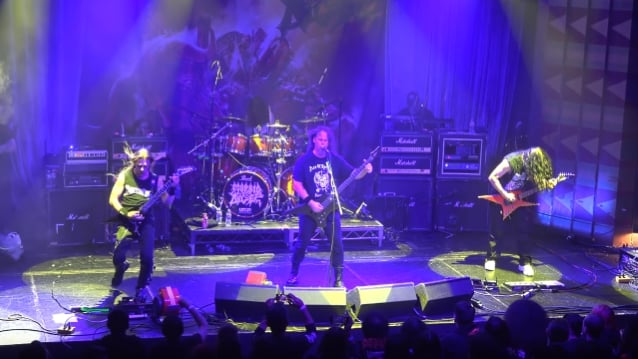 Prior to MORBID ANGEL's performance in New York City on March 7, vocalist/bassist Steve Tucker spoke with Heavy New York. The complete interview can be streamed below. A few excerpts follow (as transcribed by BLABBERMOUTH.NET).

On the group's most recent album, 2017's "Kingdoms Disdained":

On whether the band likes to "experiment":

Steve: "My idea of what MORBID ANGEL is is definitely death metal. I don't really think that's a pigeonhole when you're one of the people who sort of invented it... I think that's what made MORBID ANGEL successful — the fact that MORBID ANGEL was always a band that was not reactionary to what was going on around them. They were just experimenting and doing their own thing, and I think that's still something that we do, absolutely. The crazy shit that we're doing with polyrhythms and stuff alone, who else does that shit? It's crazy. It's another level of thinking and writing. Sometimes, it's absolute madness."

Steve: "From my perspective, I've always felt — and Trey [Azagthoth] said this to me years ago — it's got to sound like MORBID ANGEL. It's got to feel like MORBID ANGEL. By that, it really means [that] it's got to move Trey. He's MORBID ANGEL, dude. It was his idea long before anybody else was involved in the band. For him, I think that this has always been about letting something out, and I think it's separated MORBID ANGEL from a lot of other bands, just because Trey's not a normal motherfucker. He's weird. You just meet the guy, [and] you might understand how some of this comes from left field. He's an original mind. I don't know a lot of people that are original minds."

On touring with CANNIBAL CORPSE:

Steve: "This is something that I've wanted to happen for a long, long time. These are my friends. Who doesn't want to tour with their friends? You tour with a lot of bands; your friends are in a band; why wouldn't you tour with them? It took a long time to make this shit happen. It took Decibel magazine to make this happen. For me, this is the way I wish it always was. I have to be honest — sometimes I think it's an okay idea to expose people to something different, but I don't really enjoy it all the time. Sometimes, it's stuff that I just am not relating to. Everybody on this tour, I can relate to them sonically. Everyone reverberates on the same sort of wavelength on this tour."

On the Florida death metal scene:

Steve: "I think by the late '80s and maybe the early '90s, a lot of people flocked there that were of the same mind. People like Corpsegrinder — he went down to jam with MONSTROSITY. He's been in Florida ever since. I think like San Francisco before it for thrash metal, it was just a place where a lot of people popped up. One badass band came from there — DEATH — and it spawned and influenced hundreds and hundreds of demo-listening-to guys — musicians [and] dudes who loved [Chuck Schuldiner's] ideas. Trey as well. I think that those two guys, they were from there; there was a vibe there; and I think it came out in their music. It was something that caused an entire scene to develop pretty much worldwide. I think that dudes in Sweden, it was the same — they were influenced by those demos. It's just the reverberation. I really think it's just about vibes in the air, and I think at that time, all those bands that spawned... I just think it was a natural progression. You take your METALLICAs and your SLAYERs and you combine them, what do you really get? You kind of get death metal."

MORBID ANGEL's recent tour with CANNIBAL CORPSE marked the first time ever that the two legendary death metal bands had toured together in America.

MORBID ANGEL's ninth studio album, the Erik Rutan-produced "Kingdoms Disdained", was released in 2017 via Silver Lining Music. The record was Tucker's first with the group since 2003's "Heretic".