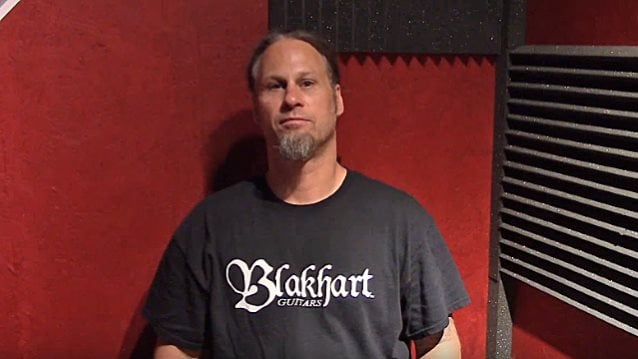 Steve Tucker of MORBID ANGEL and WARFATHER took part in the latest installment of "20 Questions With Scooter". You can now watch the chat below.

Speaking about what it has been like being back in MORBID ANGEL for the past two years, Tucker — who is on his third spell with the group — said: "MORBID is what it is, man. It's legendary. For me, MORBID's fun, man, because I come in and I do my part — I have my part. And MORBID is its own machine, man; MORBID ANGEL just exists and keeps going and is this entity that, really, is a part of Trey [Azagthoth, MORBID ANGEL guitarist], man. And I just enjoy being a part of it, and I've always really enjoyed and loved the things that Trey and I created together. I think it's nothing like what Trey and David [Vincent, former MORBID ANGEL frontman], the other singer from MORBID, created; it's something different. I bring something different out in Trey and he bring something out in me. But it's good stuff to me. It's always been good stuff and stuff I've always been very proud of. So with MORBID, man, I'm really just… I'm stoked to be a part of it and get to go out and see people I haven't seen in years and play songs I haven't played in years. I mean, we talk about these songs sometimes, how long it's been since this album came out, and it's way longer than I even wanna think about. But to get play 'em again, man, it's great — it's very enjoyable."

Tucker also talked about MORBID ANGEL's latest additions, drummer Scott Fuller (ANNIHILATED, ex-ABYSMAL DAWN) and guitarist Dan Vadim Von (guitarist/frontman of the American death metal band VADIMVON). He said: "Scotty is young, man. It's kind of funnt. Scotty is, I think… Man, I don't even know how much younger he is than me, man… like fifteen years or something. And it's really weird, man, but he's a phenomenal drummer. And it's funny. I took influences from bands like AC/DC and SLAYER and METALLICA and all the other thrash bands out there, [like] KREATOR and SODOM, all these bands, I took 'em in and I turned 'em into something that they probably think is obnoxious. Well, Scotty did it too. Scotty was influenced by these bands, and he was influenced by MORBID. What he's doing, his generation, man, his drumming is just… to me, it's completely next level. And Daniel, man… Daniel, he's a really interesting guy, man. He was born in Russia, in the USSR, under communist rule. Just hanging out with this guy, some of the stories this guy tells you are just absolutely mind-blowing. He literally, man, started off in a different world. You know, communist USSR and the United States in the '80s were about as far from each other as you could possibly get on this planet, as far as opinion and as far as location. So he's from another world, man. But it's the funny thing about music — we get in a room and we all come to the same page and lock in together, man."

He continued: "So it's interesting, man. It's really interesting to be involved with MORBID ANGEL with two people that I'm really… coming into it, was not familiar with. There's other elements that kept it glued together. Like, I mean, we were working with [producer and former MORBID ANGEL guitarist] Erik Rutan. I couldn't be more familiar with Erik. So there was that comfort kind of leveling off this newness. So somehow it all gelled together, man, and it's all working and I'm really happy with what we've got going on."

Tentatively due before the end of the year via UDR Music, MORBID ANGEL's new disc was recorded at Mana Recording in St. Petersburg, Florida with Rutan. The LP will mark the band's first release with Fuller, who joined MORBID ANGEL last year following the departure of Tim Yeung. It will also be MORBID ANGEL's first album to feature Tucker since 2003's "Heretic".

Dan Vadim Von joined MORBID ANGEL in January as the replacement for Norwegian guitarist Destructhor (a.k.a. Thor Anders Myhren), who left the band two years ago.

MORBID ANGEL's first U.S. tour of 2017, which kicked off on May 23 in Orlando, Florida, features support from SUFFOCATION, REVOCATION and WITHERED.