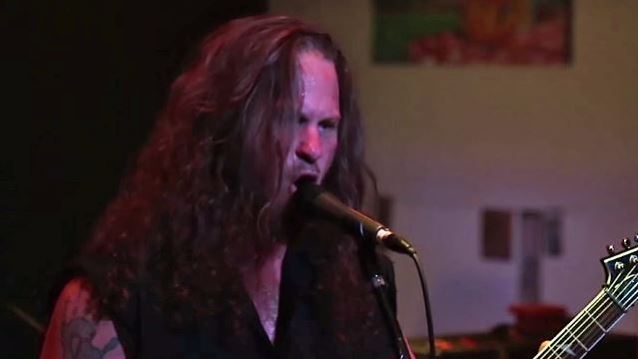 Returning MORBID ANGEL bassist/vocalist Steve Tucker was interviewed on the June 26 edition of the "The Metal Magdalene With Jet" show on Metal Messiah Radio. You can now listen to the chat using the Spreaker widget below. A couple of excerpts follow (transcribed by BLABBERMOUTH.NET).

On his initial departure from MORBID ANGEL:

"Yeah, it was 2003 or 2004. I don't really remember. I believe it was 2004… But, really, what happened was, man, I just really had a lot of things going on. I was living a pretty crazy life. I mean, I had a lot of things going on in my private life. I married a woman from another country, and it just ended up causing all kinds of just crazy insanity in my life. And, to be honest with you, at the time, my personal stuff just completely got in the way [of] being able to give a hundred percent to MORBID ANGEL. And at the time, they may have been a little bit upset with me, and I may have been feeling that vibe. So, at the time, I really thought it was time to, you know, go ahead and do what I was gonna do, and let them do what they were gonna do. And, of course, everybody knows David [Vincent] came back, so… To be honest with you, at that point, I was kind of thinking, 'Hey, man, great. David's back. I hope these guys do a fucking amazing album, and everybody will kind of get what they want, man.' But I don't think that's what happened."

"I mean, it was definitely different. I mean, it's definitely a different album. I don't really know too much about that album, to be real honest with you. I really don't really care to talk too much about the album. But, I mean, it has MORBID ANGEL's name across the top — it's a MORBID ANGEL album — so therefore it is what it is… As I said, I really don't know so much about that album, and I definitely really don't know what was going on with MORBID ANGEL at the time or anything. All I really know is that when I got the phone call from Trey [Azagthoth, guitar], when he called me to ask me to come back this time, when he called me, he told me, 'Man, I want the band to be death metal. I want the band to be brutal. I want the band to be underground. I wanna do what we used to do, because I love doing that, and that's what I wanna do.' And he asked me, would I like to do it as well? And I said, 'Yeah. I think I would.' I think Trey is brilliant; I always have, and I always will. I mean, Trey, just like myself, he has his moments of insanity; we all do. So it is what it is. I mean, c'mon — that's probably why we play death metal and not some candy-ass pop stuff. All I know is I'm back in MORBID ANGEL to do a death metal album. I mean, I expect the album to be full-on death metal. I mean, I expect there to… Obviously, it's a MORBID ANGEL album, [and] there'll be twists and turns on the album, there'll be stuff that's different, but I think it being aggressive and it being underground is really what it's gonna be about. I think that MORBID ANGEL is a death metal band, and that's what this album — this next one — will be."

On whether MORBID ANGEL has already begun writing songs for the next studio album:

"Yeah, there's already songs written. I mean, I know that this news [about my return to the band] has just been released and it's new for people, but, actually, this is something that we've been talking about now since way back — I think before the beginning of the year, we started talking about this. So, yeah, there's already five [or] six songs, and they're great MORBID ANGEL songs. I think the people will be very happy with the songs."

On whether there has been any talk about who may end up playing drums for MORBID ANGEL following the recent departure of Tim Yeung:

"Yeah, we've talked about it. Songs have been in the writing process, as far as the initial creation of 'em. And, I mean, Trey, he always — I do the same thing, actually — he writes at home with… using… he writes drums on his computer and such, and then he'll make rough demos of songs that we begin with that become songs eventually. So that's where the songs have been. We've talked about quite a few people, and there are definitely people that we have been talking to and have been discussing working with. But, to be honest, right now, I think that it's all to be seen exactly how that's all going to pan out. I think that right now the focus is just writing some great songs. Trey and I are really enjoying — at least I know I am, and he tells me he is — we're enjoying talking and going back and forth with these songs, and we're really looking forward to what the future's gonna be now."

On whether MORBID ANGEL is still signed to Season Of Mist for the band's next studio album: