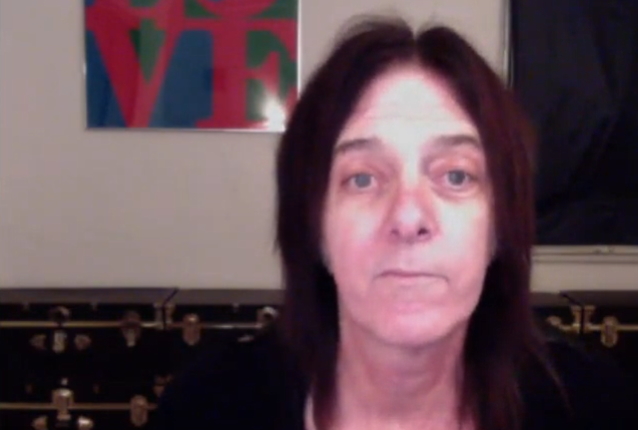 Steve Riley has defended his version of L.A. GUNS against criticism from Phil Lewis, saying that his comments are "really childish."

Riley's version of L.A. GUNS is not to be confused with the band led by Lewis and guitarist Tracii Guns, which issued two well-received albums, "The Missing Peace" and "The Devil You Know", plus the live release "Made In Milan", under the L.A. GUNS name over the last four years.

Riley's version of L.A. GUNS made its live debut in May 2019 at the M3 Rock Festival. The drummer is joined in the group by Orlando, Florida-based guitarist/vocalist Kurt Frohlich, bassist Kelly Nickels (a member of L.A. GUNS' "classic" incarnation) and guitarist Scott Griffin (who played bass for the band from 2007 until 2009, and then again from 2011 to 2014).

Asked in a new interview with "The Bay Ragni Show" how he feels about being the subject of disparaging online comments by Lewis and Guns, Riley said (see video below): "I think it's funny because I don't have any problem with those two guys, but they have a problem with me and Kelly and Mick [Cripps, former L.A. GUNS guitarist]. And I never understood that. They trash-talk on the Internet, and it's something that me and Kelly Nickels will not do. I'll never trash people that I played with. It doesn't make any sense. Why would have I played with them in those early years and had so much fun writing with them, touring with them and doing videos, and just pretty much doing anything, and then, later on in life, trash-talk. I just couldn't go there, and I know Kelly Nickels is the same way, Mick Cripps is the same way — we just don't go there. But those guys have done plenty of trash-talking for us, and we never got it, because we had some special times with those guys."

Riley also addressed Lewis's recent comment that the debut album from Steve's version of L.A. GUNS, "Renegades" is a "steaming pile of shit that was written and recorded in two weeks." Riley laughed and said: "That's wrong, first of all, on a number of [levels]. First of all, to say something like that is kind of… I've been in the business for so long, it's so childish — it's really childish; the fans are aware of it; it comes off bad. I read that also, and I read the comments [from fans] after it. The fans don't dig that; they don't like it at all. And he said a number of bad things. And the odd thing about is that Phil and I were 15 years together without Tracii. And there wasn't even a band breakup. He said he was gonna do a few shows with Tracii, and it was gonna be [billed as] 'Tracii Guns and Phil Lewis' — it wasn't even gonna be L.A. GUNS. And I was taken aback, because I knew that he didn't get along with Tracii. Both me, Kelly and Mick Cripps, we knew this for a number of years, they trash-talked each other for years and years — they put each other down. So when [Phil] said he wanted to do some shows with [Tracii], I was taken aback a little bit — I was surprised. He said, 'I'm gonna do this for about five or six months, do some shows with him, and then I'm gonna come back.' So that's how we left it — no yelling, no going after each other. So I'm surprised that he is so mad at me in the press and going off on me. Again, I'll never do it — I won't return it to him; I won't say he sucks or any of that."

Riley continued: "When he said that [about 'Renegades'], he's also wrong on another area — it didn't take two weeks [to write and record]. It took two weeks to record it, but we had done long pre-production over the summer — we were doing a pre-production for about two months and exchanging ideas and putting songs together. Then I had the guys fly out here to L.A. And then we did a short pre-production and right into the studio. That's what took two weeks — we recorded for a full week, mixed and mastered for a week. So we didn't write it in two weeks. That's crazy. So we had worked on the album for quite a bit.

"It is what it is," he continued. "And I kind of let things slide right off me. I can't let things absorb into me like that. I've just gotta move forward and just stay true to myself and not cut people down and especially cut former members down that I had a good time working with. I'm not there; I can't go there."

In January 2020, Riley was sued by Guns and Lewis in California District Court. Joining Riley as defendants in the case are the three musicians who perform in his recently launched rival version of L.A. GUNS; that group's manager, booking agent and merchandiser; and Golden Robot Records.

Despite leaving the band soon after the release of 2002's "Waking The Dead" to focus on BRIDES OF DESTRUCTION (his short-lived supergroup with MÖTLEY CRÜE bassist Nikki Sixx), Guns "is the owner of common law trademark rights" for the L.A. GUNS name and logo, the complaint claims. It notes that Guns founded the band in 1983, four years before Riley joined, and that Riley did not perform on the group's 1984 debut EP and contributed to just a single track on their 1987 self-titled full-length debut.