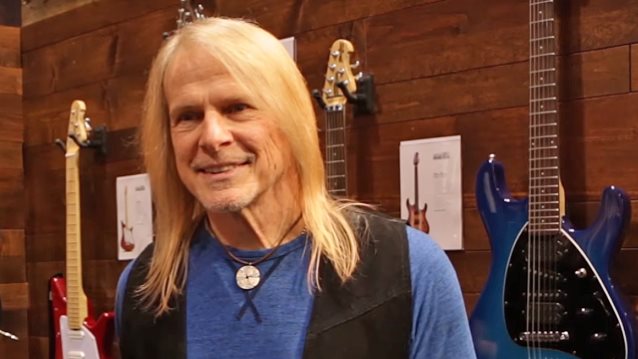 DEEP PURPLE guitarist Steve Morse says that "it would be nice" for the band to perform with Ritchie Blackmore one last time, explaining that everybody involved would "get a kick out of it if they could get past the psychological barriers."

Asked by Billboard how he feels about Blackmore's recent comment that he would be interested in playing one last show with DEEP PURPLE, Morse said: "Well, he's one of the founding members of DEEP PURPLE. Fans would love it. It would be nice, I think, to see closure with everybody involved, and the bad feelings put aside. I think they'd all get a kick out of it if they could get past the psychological barriers. I am a fan of music, I'm a musician. I am not a politician.

"Now, a lot of people would feel intimidated, to have somebody come who's likely to play over them, standing in front of them and stealing the spotlight or whatever. But I thought, a lot of people would love to see this. And at the Rock And Roll Hall Of Fame, I thought Ritchie Blackmore was going to show up. He could've played three songs, but I ended up doing them, because he didn't. That was up in the air.

"There have been a lot of bad things said and done amongst the guys, and anyhow, it is like the ice has to be broken. I think that once that's done, they'd all have a great time. But I don't know how to go about doing that. Anyway, as far as I am concerned, all members, past and present and future [laughs] of DEEP PURPLE, are welcome."

In a recent interview with Germany's Rock N Roll Reporter, Ritchie stated about the prospect of sharing the stage with PURPLE again: "I think if they would be interested, and our schedules aligned, I would be available for one show — for nostalgic reasons. But I don't think DEEP PURPLE have any interest in that. They have their niche and are not into doing things like that. We are friends and I've doing my music for twenty years, and they're doing their stuff for twenty years. It's probably not likely [to happen]. Also, their management wouldn't like it, even if it was for just one show. Their management wouldn't allow it, I'm sure."

DEEP PURPLE drummer Ian Paice told "The Rock Brigade" podcast that there was "no point" for the band to consider a reunion with Blackmore, explaining that "we have a wonderful feeling within the band, everybody's very friendly, and all we have to do is go on stage and make the music; there's no other considerations to worry about. I think Ritchie's life doesn't work like that. I think it's a little more complex. And at this stage of my life, I don't need cloudy areas. I like it to be clear and crystal and know that it's gonna be fun. I love Ritchie to death, but I can't guarantee every day with him is gonna be fun."