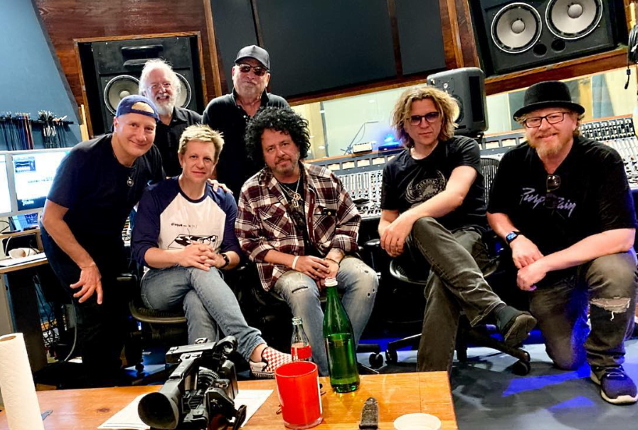 TOTO guitarist Steve Lukather has confirmed to Tone-Talk that he has completed work on his eighth solo album. The follow-up to 2013's "Transition" is due in the coming months via Mascot.

Lukather said (see video below): "I was lucky to get in the studio and cut everything live with the guys before this virus took over.

"My whole point with this record was, I've done the over-produced records, and I love all that shit, and when I say that, I don't mean it in a negative way. I like big productions; all my favorite albums are big productions. So I make no apology for that.

"My concept with this was I wanted to hire some cats and my friends — no rehearsal," he explained. "Me and [Jeff] Babko and Joseph [Williams, TOTO] and [David] Paich, we wrote some things, and Jeff did some charts, and we got everybody in the studio. Jeff Babko on keyboards; David Paich on organ and piano. We didn't use any synthesizers on the record. Jorgen Carlsson from GOV'T MULE played bass. Gregg Bissonette played drums. It was all done live; I did all my solos live. I made myself do it. No click tracks. Old school — '70s. I went for a '70s thing, and I even did a couple of '70s cover tunes for fun, of some of my favorite artists, just to set the tone for everything.

"At this point in the game, it's a vanity record for people who like our stuff," Steve added. "Joseph's on it, and Joseph's new album, he's been spending so much time meticulously producing it and making it great. This is his first big musical statement, and he's really grown so much as a musician. I'm so proud of him. [He's] one of my best friends — one of the only people I allow into my house at this point. He comes up every day and my girl feeds him. I love him to death. He's just family.

"I played on his record, so these records are gonna come out on the same level, and we're gonna go out and work together. [And there will be] surprises to come down the line."

In addition to his work with TOTO, Lukather has played on hundreds of albums with some of the biggest stars and legends in music, including VAN HALEN, Whitney Houston, Alice Cooper, George Benson and Rod Stewart. He even played guitar on Michael Jackson's multi-million selling milestone album "Thriller".