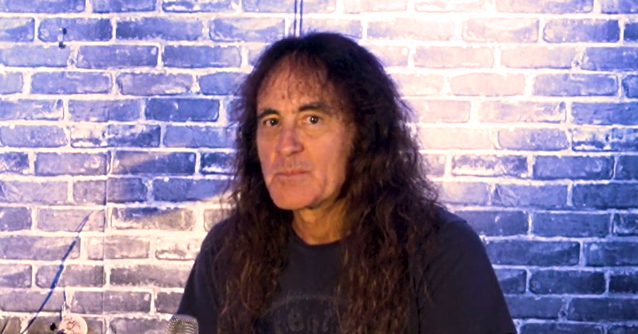 IRON MAIDEN bassist Steve Harris recently discussed his side project BRITISH LION — whose second album, "The Burning", is now available — with Paulie Walnuts of HardDrive Radio. The full conversation can be seen below. A few excerpts follow (as transcribed by BLABBERMOUTH.NET).

On the seven-year gap between BRITISH LION albums:

Steve: "It's just ridiculous. I can't believe where the time goes. It's crazy. We had done quite a bit of touring with BRITISH LION — last year, we did Canada, South America and Japan for the first time — so we've done a fair bit of gigs, but to be seven years between albums is just mad. [It's nice to] finally get it out, though."

Steve: "We get together every now and again, bits and pieces. That's how we record as well. We did a tour and then went straight in and recorded a bit of the album, then did another tour and went and recorded a bit more and so on. I wanted to record this album in a studio, live, properly. The first album kind of wasn't like that so much. I really wanted to do the process the way I'm used to doing it. I'd love to just go in and do an album [for] two or three months like we do in MAIDEN, but there just ain't time."

On whether he approaches BRITISH LION differently than IRON MAIDEN:

Steve: "Not really. The same sort of principles apply, I think, to the recording, and just the way you approach it. [You] try and capture that live endeavor, which is very difficult. All the years, we've been trying to do that with MAIDEN, and now BRITISH LION as well. It's not the easiest thing in the world to capture that essence, but I think we've captured it as best we can."

On performing live with BRITISH LION:

Steve: "You've just got to get people in and prove what you can do. Some people are going to love it, and some people maybe [won't], but most people seem to have really enjoyed it. We go out and give 110 percent just like we do in MAIDEN. It's been a lot of fun. I think people who come to see the gig go home with a smile on their face, and if they haven't, well, there's not much you can do about that."

On the importance of eye-catching album artwork in a digital age:

Steve: "I think it's massively important — more important than people even realize. I've always thought it's so ultra-important — so much so that I'm not going to mention any names, but there's bands that I absolutely love that I want to wear the t-shirts of, but I can't wear them because the artwork's so bad. You wouldn't wash your car with it, it's that bad. I want to support that band — I want to wear them — but I can't, because their [art] is just so poor."

On playing the Monsters Of Rock cruise in 2018:

Steve: "I really enjoyed it. I didn't know what to expect, because I'd never been on a cruise before of any kind... I really loved it. They asked us straight away, 'Can you come back the following year?' I said, 'I can't — I'm on tour, but we can do it the following year after that,' so off we go."

On whether it's "refreshing" to tour on a smaller scale with BRITISH LION:

Steve: "I like playing small gigs as well as the big ones. Of course, you've got less gear, less budget and everything. I do most of the bookings and stuff myself, because I'm used to doing that sort of thing. I know where I need to stay... It is what it is. You just have to get on with it, but I enjoy that side of it... Coming in to a place for the first time, you've got to put your toes in the water and see what happens. That's the scary thing, because you don't really know when you go to a country for the first time — you've got no idea as to whether people are actually going to turn up or not... You can't take anything for granted. Even with MAIDEN, we don't — we still go out and do interviews."

Steve: "I would like to release a live album, because I think the songs have evolved live into a little bit of a different thing now. It'd be nice to capture that essence."

BRITISH LION kicked off its first U.S. tour on January 18 at Ace Café in Orlando, Florida. The trek will hit a number of cities, including San Antonio, Dallas, Memphis, Atlanta and Fort Lauderdale, before concluding on February 20 in New York.