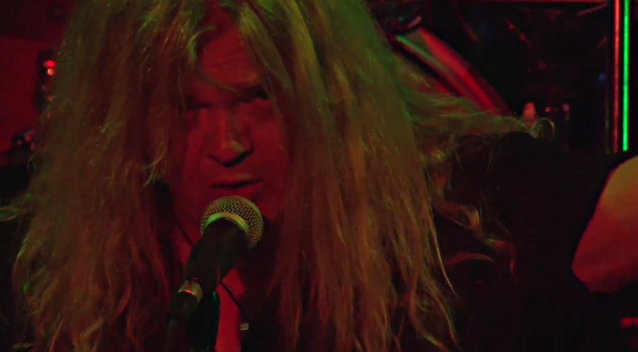 Slayed In Oregon has uploaded video footage of STEVE GRIMMETT'S GRIM REAPER, the revamped version of the cult '80s British metal act GRIM REAPER led by singer Steve Grimmett, performing on June 17 in Seattle, Washington. The 30-minute report, which can be seen below, also includes an interview with Grimmett.

Asked about the progress of the "From Hell" recording sessions, Grimmett told Slayed In Oregon: "We're still recording it, basically, which we're gonna carry on as soon as we get home. We're gonna give it a week and then we get back in the studio and finish it off and get it out. We're gonna do one song tonight from the album, so you'll get to hear what it sounds like and see if we've still got it right. 'Cause, obviously, it's a new band, a totally different band. But Ian [Nash], the guitarist, he's kind of like an old student of Nick's [Bowcott, original GRIM REAPER guitarist]. He plays just like him, and he's a phenomenal guitarist."