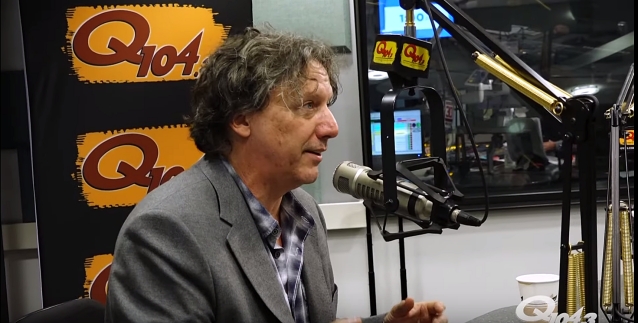 Former THE BLACK CROWES drummer Steve Gorman, who recently published his tell-all memoir, "Hard To Handle: The Life And Death Of The Black Crowes", spoke in detail about the circumstances that led to the band's 2014 breakup during an appearance on Q104.3 New York's "Out Of The Box With Jonathan Clarke".

"2013, we toured from March through December; it was a lengthy tour," Gorman recalled (see video below). "And then we were taking '14 off. And the plan, which everybody had agreed to before the 2013 tour even started, was do this tour, then take a year. And then 2015 was gonna be the 25th anniversary [of THE BLACK CROWES' debut album, 'Shake Your Money Maker'] and farewell tour. Not to say the band might never play again, but we're not doing a tour like this again. This is the last time we're going out and doing a marathon tour. We might get together and do a summer run or do festivals, but let's put this behind this. And we did discuss this — how important it is to end it right; to just go out with some self-respect and dignity and appreciation for all we had done and the fact that we're still here and that we have an audience. And all of these things. And so when the tour ended in 2013, everybody went home, and I know for Rich [Robinson, guitar] and myself, anyway, we were thinking, 'Okay, we have a year to do whatever else, and then we're gonna hit it for one last big thing.' That was gonna be the plan. And then in February of '14, Chris [Robinson, vocals] decided that in order to do that, he was gonna have to dramatically change the terms of the band, how it operated financially. So he demanded the lion's share of the money to do the tour, which up until that point, money went three ways [to the three band founders]."

He continued: "I had a sports talk radio show in Nashville at the time, and it got picked up by Fox Sports Radio, so suddenly my show went national, and [Chris] was not happy about that, for reasons that only he can answer. Just the idea that, 'Who are you to create something outside this band?' I don't know. I mean, honestly. You'd [have to] ask him, whether he even remembers that he was upset about it, but he was very offended by that somehow. And then he had a million other grievances — not that they were ever discussed or dealt with effectively or appropriately. And so at some point, in February of '14, his wife, who was then managing his solo career, e-mailed our manger, Pete Angelus, and said, 'Please give this to Rich and Steve,' and it was a new list of demands that were non-negotiable. And it was he wanted me removed from the band ahead of the 25th-anniversary tour. So, he said, 'Steve's out, 'cause I need a real musician, not a talk-show host.' It was a comment — whatever. It doesn't matter, 'cause it's so insane, you can't take it seriously. So he wanted my third, so it would be 66-33, but then he wanted part of Rich's third to make it 75-25. It's the whole net for an entire tour — everything. Not for record sales — that's different. But touring and merch and all that's the bulk of it — that's the real money.

Asked what Chris's reason was for demanding to take the bulk of THE BLACK CROWES' money, Steve replied: "Mental illness. I don't know. I mean, honestly. I can't imagine. After 27 years of everybody contributing all this, you suddenly say this is only worth… It's in the book, part of the e-mail. It made no sense. It was just crazy talk. And so, of course, the answer was no. And that was the end of the band. I mean, that was, like, 'Okay, we're done.' And then the brothers have been attacking each other ever since. And I was just content to say, 'That's not how I wanted it to end.' But now six years removed, I can't imagine it ending any differently. I can't imagine any of it going anything other than the way it happened. It was just destined to be that band and have that ride."

When THE BLACK CROWES announced their split in 2014, Rich issued a statement saying that he loved his brother and respected his talent but that "his present demand that I must give up my equal share of the band and that our drummer for 28 years and original partner, Steve Gorman, relinquish 100 percent of his share … is not something I could agree to."

Chris and Rich Robinson announced on Monday that they were teaming up with new musicians to perform "Shake Your Money Maker" in its entirety on a 30th-anniversary tour next year.

THE BLACK CROWES celebrated the tour announcement by playing an intimate gig at the Bowery Ballroom in New York City last night. They will also perform at the Troubadour in West Hollywood, California on Thursday (November 14).