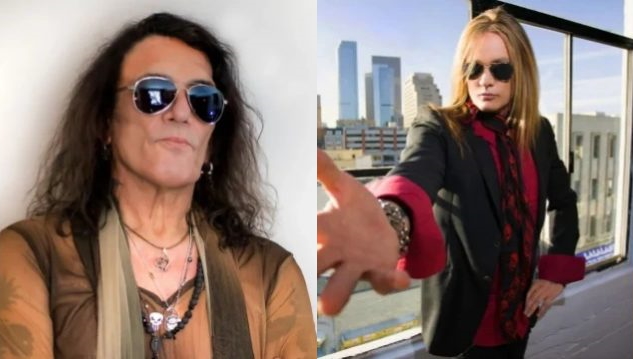 Sebastian Bach says that Stephen Pearcy's Twitter "account got hacked" and the RATT singer never implied Americans should refrain from wearing a cloth face mask or covering in public even though it protects against the coronavirus.

"We just got a text from @StephenEPearcy + Kristi telling us that Stephens account got hacked and he never tweeted to unmask America," Bach tweeted Friday night (July 3). "I am so happy to hear that one of my heroes and great friends is on the good team. We have got to do everything we can to get our lives back!!"

Two days ago, Pearcy came under fire for apparently sharing the hashtag #UnMaskAmerica on his Twitter, which many of his followers took to mean that he was telling them to defy country-mandated orders to wear masks or face coverings. Pearcy later deleted the tweet and shared a photo of himself with braided hair, holding a Robbin Crosby guitar while wearing a mirrored face mask with the caption: "Maybe if we all wear this mask, we can all have peace. Or we can wait for the real guys to come down and straighten things out. I'm waiting for the Ass kicking" In response to Stephen's tweet, Bach wrote: "Dude this shit is actually not funny. Please stop embarrassing yourself and all of rock and roll"

Later on Thursday, Pearcy seemingly tried to explain away his #UnMaskAmerica tweet, writing: "I only apologize for things that hurt my audience, politics leave me the fuck out, don't be starting shit. Not into it. Not for press, not for nothing. Note; If my post was so far above heads I'll explain. ALL peoples, races, if we had the same face (Extraterrestrial alien) no prejudice. Peace." He added: "#mask or do as you please. That was an unfinished post."

With most U.S. states requiring masks at least in crowded spots where social distancing isn't possible, several hard rock and heavy metal musicians have used their platforms to remind their followers to mask up amid the coronavirus pandemic, including TESTAMENT's Alex Skolnick, QUEENSRŸCHE's Todd La Torre, TRIVIUM's Paolo Gregoletto and SONS OF APOLLO's Mike Portnoy.

Three weeks ago, the U.S. Surgeon General urged people to wear face coverings, saying they will promote freedom during the coronavirus pandemic.

"Some feel face coverings infringe on their freedom of choice- but if more wear them, we'll have MORE freedom to go out. Face coverings [leads to] less asymptomatic viral spread [leads to] more places open, and sooner!" Dr. Jerome Adams wrote on Twitter.

In a study published last month, researchers from Texas A&M University, the California Institute of Technology and the University of California San Diego, concluded "that wearing of face masks in public corresponds to the most effective means to prevent interhuman transmission."

In early April, the Centers For Disease Control And Prevention issued new guidelines that Americans should wear face coverings in public.

We just got a text from @StephenEPearcy + Kristi telling us that Stephens account got hacked and he never tweeted to unmask America. I am so happy to hear that one of my heroes and great friends is on the good team ✌️ We have got to do everything we can to get our lives back!!?

so this “hacker” had multiple pictures of him wearing masks and saying the whole thing is stupid. i don’t believe it for a second, you’ve been bamboozled!

That’s hysterical that it what he went with. Did I just post this or was I ‘hacked’ too?! ???

Nah. He's just backtracking now, because of all the hate hitting him because of his advertisments of his ignorant ideology

That's good to hear....it did sound a little weird he would tweet that cause he's always respectable and cool...?

I believe you that he told you that, but I don’t believe him.

I call bullshit bro. Love Ratt but hes trying to weasel out of this now

He’s off his rocker. He fell out of a tree. He’s been standing on shaky ground, and there’s no helping Steve. pic.twitter.com/tVGxq3l2HJ

yup, most common excuse.... ''it wasn't me, my account got hacked into''. Heard that so many times before.

I call bullshit on his account getting hacked. He’s not a flaming liberal like you are , he’s just saying that because the left attacked him and he doesn’t want them to cancel him. He’s more relevant then you know that he’s in a geico commercial

I would hope he would feel free to hold whatever beliefs he chooses. It sounds like you don't value HIS opinion but rather YOUR opinion in his mouth. Sad.