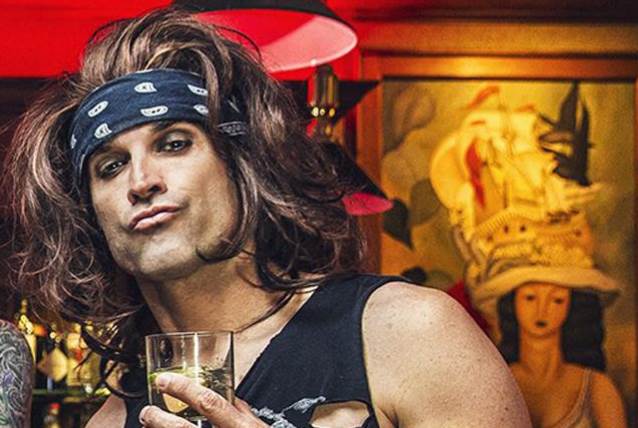 TC Electronic has stopped advertising a preset guitar pedal effect called the "Pussy Melter" — which it designed in conjunction with STEEL PANTHER guitarist Satchel (real name: Russ Parrish) — after a number of musicians criticized the Danish audio company for using sexist language to title the TonePrint.

TC initially unveiled the "Pussy Melter" on Monday, describing the effect on the company's web site as: "When we met up with STEEL PANTHER's oh-so-humble guitarist, he had only one condition: that the tone be as wet as the ladies on the front row."

BRAIDS' Raphaelle Standell-Preston and JAPANESE BREAKFAST's Michelle Zauner are among the female musicians who objected to the name and description of the effect, and a petition to remove the product has received over 660 signatures so far. The petition, which was started by musician Jessica Fennelly, called the TonePrint's description "offensive" and "obviously sexist."

BRAIDS shared a link to the petition on Twitter, adding: "As a female guitarist and just a female in general this makes me super disappointed!"

Earlier today, TC Electronic removed the listing for the "Pussy Melter" from its web site and issued a statement to Music Radar, saying: "It's become clear that a number of people have been offended by the title and description of a delay TonePrint that we created over a year ago with STEEL PANTHER's Satchel. STEEL PANTHER is an American comedic glam metal band from Los Angeles, California, mostly known for their profane and humorous lyrics, as well as their exaggerated on-stage personae that reenact the stereotypical 1980s 'glam metal' lifestyle (from Wikipedia). It has never been our intention to offend anyone but simply to provide fans of STEEL PANTHER with guitar presets made by Satchel. We recognize that the material was inappropriate and we have removed the TonePrint in question from the app and we will take it down from our website as soon as possible. We sincerely apologize."

Asked if he has any concerns that the #MeToo movement might make it more difficult for STEEL PANTHER to continue performing songs that ooze with misogyny and sexism, and inviting girls up on stage to flash their breasts, singer Michael Starr told Ornella Carlone of Comebackstage : "People who buy tickets to our shows know what to expect. And people that maybe come for the first time, if they don't like it, they just leave. And that's just the way it is. If you go see a comic, or even a magician, sometimes they have girls on stage. And comics make fun of having sex with girls and fucking them and all that kind of thing. There's a fine line between getting a massage and making a girl suck your dick than just saying hi to them. We're asking: 'Hey, will you please show your boobs? You don't have to.' Here's an example: [addressing the interviewer directly] Hey, will you show your boobs?" After the interviewer said "nope," Starr continued: "Boom! See how easy that was? Everybody's happy."

STEEL PANTHER is continuing to tour in support of its latest album, "Lower The Bar", which was released in March 2017 via Kobalt Music Recordings.

What f*cking year is this ???
Pls sign my friends petition to EDIT/REMOVE @tcelectronic disgusting write up for their “pussy melter” guitar effect pedal. As a female guitarist and just a female in general this makes me super disappointed ! https://t.co/LK2YZJt70d pic.twitter.com/EILfX9lQhh