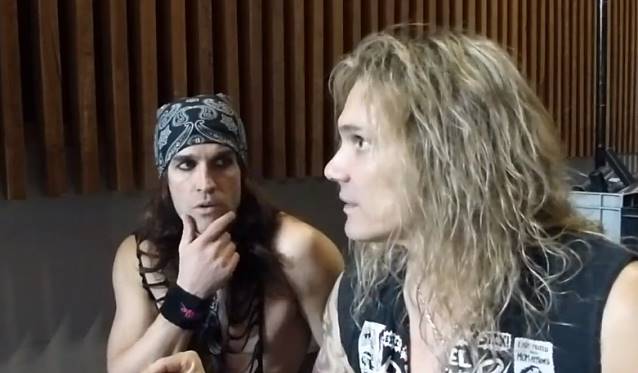 STEEL PANTHER has just released its third album, "All You Can Eat". The band premiered the CD in a unique interactive experience. The premiere is taking place here and features a television set that broadcasts all things STEEL PANTHER, including the complete album stream of "All You Can Eat".

With each change of the channel on the television set, fans experience different content from the STEEL PANTHER world. The set broadcasts the latest STEEL PANTHER music videos, current episodes of SP TV and a few surprises as well. The experience takes fans deeper in to the lifestyle of STEEL PANTHER and is a must-see for all Fanthers around the globe.

STEEL PANTHER has also launched a worldwide "hotline" that fans can call for up to the minute updates on the band. Fans who call 941-75-Steel (941-757-8335) and verify that they are over 18 are sent an immediate link to see the band’s latest unreleased video for the song "Gloryhole". The video was shot in an unnamed glory hole location and features a performance by STEEL PANTHER in the stalls as only they can do it. A few surprise visitors showed up that day during filming and can be seen in the video as well. The phone number has been getting major attention with fans around the globe calling in to experience what STEEL PANTHER delivers on the "hotline."