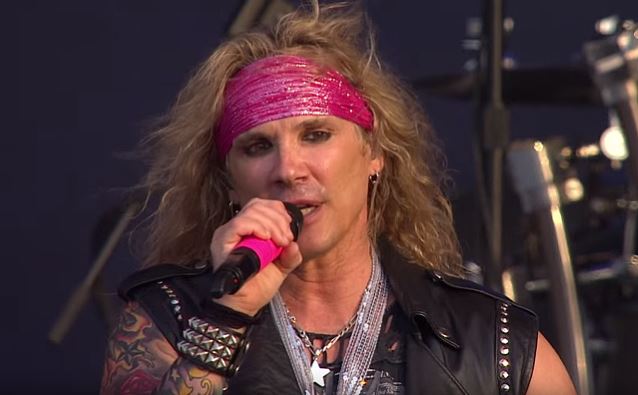 STEEL PANTHER's Michael Starr has commented on the ongoing feud between GODSMACK frontman Sully Erna and MÖTLEY CRÜE bassist Nikki Sixx, saying that he wants to invite the two musicians to "have a fight" at his home in Los Angeles.

Asked who he thinks would win the fight between Sully and Nikki, Starr told Meltdown of the WRIF radio station in Detroit, Michigan: "Man, Sully is… He's kind of burly. He may be little, but he can go at the knees, right? I think he'd punch the shit out of Nikki's knees. 'Cause Nikki's older now, so his knees are a little weak."

He continued: "I'll tell you what: if they wanna have a fight, I'll set up a ring in my backyard and we'll televise it, and it'll be killer. So I wanna invite them to have a fight in my backyard in Sherman Oaks, Southern California. It's out there… C'mon, Nikki. C'mon, Sully. Let's see who wins this fight."

Back in January 2012, Sixx poked fun at Erna's diminutive stature, joking on Twitter that MÖTLEY CRÜE was looking for someone to play "an angry midget" during the band's first Las Vegas residency and "was thinking of using the singer from GODSMACK."

During an appearance on a recent installment of HATEBREED frontman Jamey Jasta's official podcast, "The Jasta Show", Erna stated about Sixx: "I'll say it straight out: I've never met a bigger fucking dick in my life than Nikki Sixx. He's a douchebag. He's straight-up a fucking douche, and I don't give a fuck what he says. He knows exactly where I am, and he knows exactly how he can find me anytime that motherfucker has the balls to come and look me up. And I'll say it straight out on your podcast. He's a dick, man. He just treats people like shit."

In 2011, Sixx had the following to say regarding Erna's complaints about how GODSMACK was treated on the Crüe Fest 2 tour, "Every person — from road crew, fans and even all the bands on the tour (including [Sully's] band) — was so happy, but [Erna] just seems to be crying like a bitch," Sixx replied. "Funny, even his manager told me he's an asshole... Maybe the problem is just in his head... I got no problem with him."