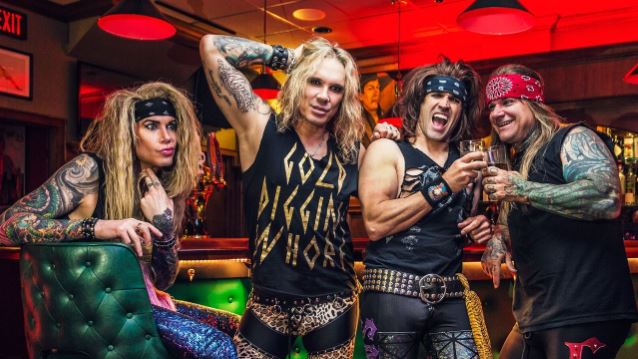 The Michael Starr-fronted glam rockers from Los Angeles, California, who are mostly known for their profane and humorous lyrics, as well as their exaggerated onstage personas that parody the stereotypical 1980s "glam metal" lifestyle, have shared the stage with some of the biggest rock bands in the world, including DEF LEPPARD and JUDAS PRIEST. But while many within the rock and roll world "get" STEEL PANTHER, not everyone was as friendly and accommodating, according to Stix.

The drummer, whose real name is Darren Leader, told Music Life Magazine: "[MÖTLEY CRÜE members] Tommy Lee and Nikki Sixx did not like it when we went on tour with them in 2011. And that was the only time that we really felt unwelcome. The thing with those guys is I think they thought we were actually making fun of them directly. And I just gotta chalk that up to their egos being too big, because nothing that we do has anything to do with them directly. But we ended up doing the tour and it went off great and everything was totally fine," he said, adding that it was a European tour and that DEF LEPPARD was actually the top-billed band on the jaunt.

"LEPPARD was fully supportive of it," he continued. "They were amazing dudes, and I am not kidding you, that on the first day of the tour, they knew every single one of our names. And when you're DEF LEPPARD, you don't have to do that. It's just a testament to the kind of dudes those guys are, all of them. They and their crew were very, very generous."

Despite MÖTLEY CRÜE's apparent reluctance to embrace his band, Stix believes that STEEL PANTHER is "very accepted now. I mean, JUDAS PRIEST took us on tour with them and now we're out with STONE SOUR, which is a heavy band that is taken pretty seriously," he said. "We have worked to become sort of a rock and roll staple. Corey [Taylor, STONE SOUR frontman] is a huge fan and all those guys in STONE SOUR are super cool. If a dude like Corey Taylor, who is in SLIPKNOT and STONE SOUR, can appreciate what STEEL PANTHER does, then I think even the most hardcore metal fan should at least give it a shot. We may not be your cup of tea, but you can't just write us off before you've given us a fair shake."

Sixx told Australia's Music Feeds last November that he didn't care for STEEL PANTHER's music. "You know, it's not my thing," he said. "That's just me personally. I don't know. It doesn't feel… I guess a lot of people think it's funny and they're kind of a joke band and that's cool. But that's not my cup of tea. I kind of take my music a little more seriously."

Back in June 2015, Starr revealed in an interview that Lee "was pretty upset over the fact we poked fun at [MÖTLEY CRÜE singer] Vince Neil. He didn't like it. He just thinks we're just a joke, like a stupid joke band that shouldn't be playing with them. But all their fans like us."

Before MÖTLEY CRÜE toured with POISON in 2011, Sixx famously said that his band would never hit the road with other groups from the "hair metal" era because he didn't want to be "attached to that kind of fake bullshit." He later explained his position by saying that MÖTLEY CRÜE "wanted to… separate from [bands like POISON]. And we had never planned on touring with any of the bands from that era. There was no animosity — it was just that we put a very clear line."