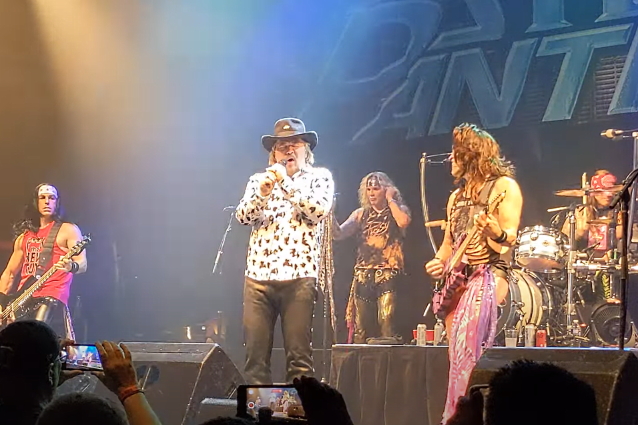 California glam metal jokesters STEEL PANTHER were joined by country star Travis Tritt on stage last night (Tuesday, September 14) at NorVa in Norfolk, Virginia to perform his 1991 classic "Homesick". Fan-filmed video footage of his appearance can be seen below.

Tritt made headlines last month when he called on Americans to fight back against mandatory vaccines. He went so far as to describe vaccination requirements as a form of "discrimination."

"In light of recently announced policies and mandates from some entertainment companies, promoters, and local municipalities which would discriminate against specific concert attendees who are not vaccinated, I feel compelled to make a statement," the 58-year-old singer told Fox News.

"I have always been a huge defender of basic human rights and liberty for all," he said. "No government, employer, or private entity should ever be allowed to infringe on those rights and liberties."

Tritt added that he believes that "all forms of discrimination need to be called out and condemned in the strongest terms possible." He went on to say he'll back "anyone who is willing to publicly stand against discrimination and the squelching of any specific freedoms and basic human rights around the world."

He also called on anyone who feels the same way as he does to "stand up" and "let your voices be heard."

"The only way these injustices can be defeated is with a unified front against them," he said. "Use your voice to stand for what is right and against what is wrong. Long live freedom!"