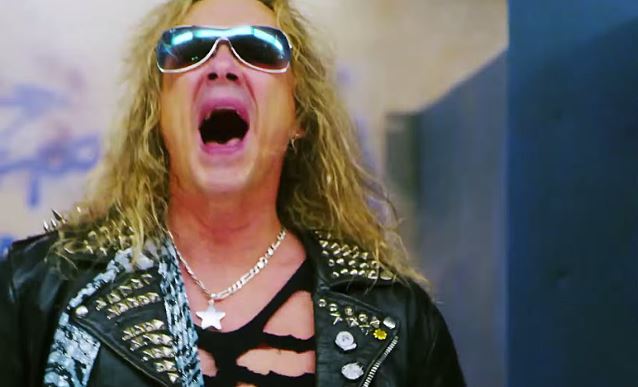 Singer Michael Starr (real name Ralph Saenz; ex-L.A. GUNS) of Los Angeles glam-metal jokesters STEEL PANTHER tells The Tennessean that, despite the band's cult band status, "now, with where we're at with 25 employees, trucks and buses, there's a lot riding on what comes out on our CDs. Plus, we're getting a lot of pressure to write clean stuff from people surrounding our camp, so they can make money off of what we're doing," he adds. "They're like, 'Look, we need a serious record from STEEL PANTHER.' From day one, we said, 'No. We're not doing that.' "

Starr explained STEEL PANTHER's attitude in a 2012 interview with Billboard. He said: "We just have fun. We've always had fun. We're guys that obviously are just comedic all the way to the core. We just decided, 'Hey, let's have fun and not take ourselves seriously."

He continued: "And you know what, dude? I'm glad that we did it this way, because now I'm happy. This is who I am, y'know? We have the [different] names but we're not putting on, like, an act. I don't have to act like some other dude. I get to be myself and people dig it. Even people that laugh at us are still fans, which is really cool."

STEEL PANTHER has just released its first-ever original Christmas track, "The Stocking Song". Featuring STEEL PANTHER's signature hooks and naughty take on the holiday season, it is available for purchase on iTunes and on Amazon.

Having wrapped a highly successful run as main support for JUDAS PRIEST in North America last month, STEEL PANTHER is currently on a North American headlining run, which kicked off in Charlotte, North Carolina. Following the North American headlining dates, the band will be play a series of "Threesomes", two three-night residencies, one in their hometown of Los Angeles and the other in nearby Las Vegas, at the cities' respective House Of Blues venues in February.