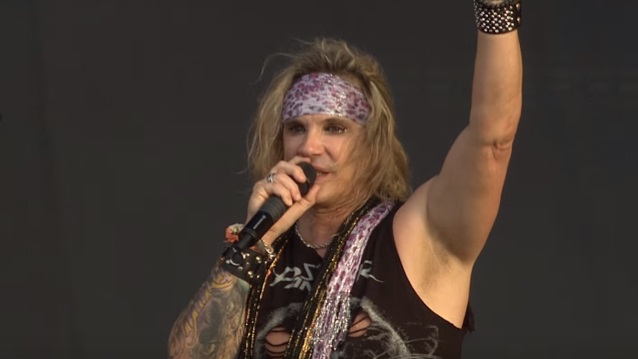 STEEL PANTHER singer Michael Starr was interviewed by Ornella Carlone of Comebackstage prior to the band's February 8 concert in Stuttgart, Germany. You can now watch the chat below.

Asked if he has any concerns that the #MeToo movement might make it more difficult for STEEL PANTHER to continue performing songs that ooze with misogyny and sexism, and inviting girls up on stage to flash their breasts, Michael said: "People who buy tickets to our shows know what to expect. And people that maybe come for the first time, if they don't like it, they just leave. And that's just the way it is. If you go see a comic, or even a magician, sometimes they have girls on stage. And comics make fun of having sex with girls and fucking them and all that kind of thing. There's a fine line between getting a massage and making a girl suck your dick than just saying hi to them. We're asking: 'Hey, will you please show your boobs? You don't have to.' Here's an example: [addressing Ornella directly] Hey, will you show your boobs?" After Ornella said "nope," Starr continued: "Boom! See how easy that was? Everybody's happy."

STEEL PANTHER is continuing to tour in support of its latest album, "Lower The Bar", which was released in March 2017 via Kobalt Music Recordings. The disc was co-produced with regular collaborator Jay Ruston, and includes eleven songs recorded at studios in North Hollywood and Sherman Oaks, California, with an additional two tracks on a Best Buy deluxe edition.