STEEL PANTHER will rock live on stage as the performance is broadcast on the movie screen with the audio available via an outdoor P.A. system as well as in everyone's car via FM transmitter. This will help to keep all attendees socially and sexually distant.

Ticket information for both drive-in shows on the "Fast Cars & Loud Guitars Tour" can be found at this location.

"Bring your hot rod and hot dates to the concert event of the weekend," STEEL PANTHER says. "This ain't your momma's NASCAR. This is STEEL PANTHER live and out of our cage in Los Angeles. You're welcome, Pennsylvania. Unfortunately, the local government has informed us that it is totally ILLEGAL to attend this concert naked. They blamed COVID; so please STILL wear a mask when you're around strangers!"

STEEL PANTHER drummer Stix Zadinia recently said that the band has been using the coronavirus downtime to work on new music.

STEEL PANTHER will take a break from writing music to stage another virtual concert event, "Rockdown In The Lockdown", on Sunday, August 16 from the Drum Channel Studio at Drum Workshop, located in Oxnard, California.

"Rockdown In The Lockdown" is being sponsored by Monster Energy, and all tickets and VIP upgrades are available here. 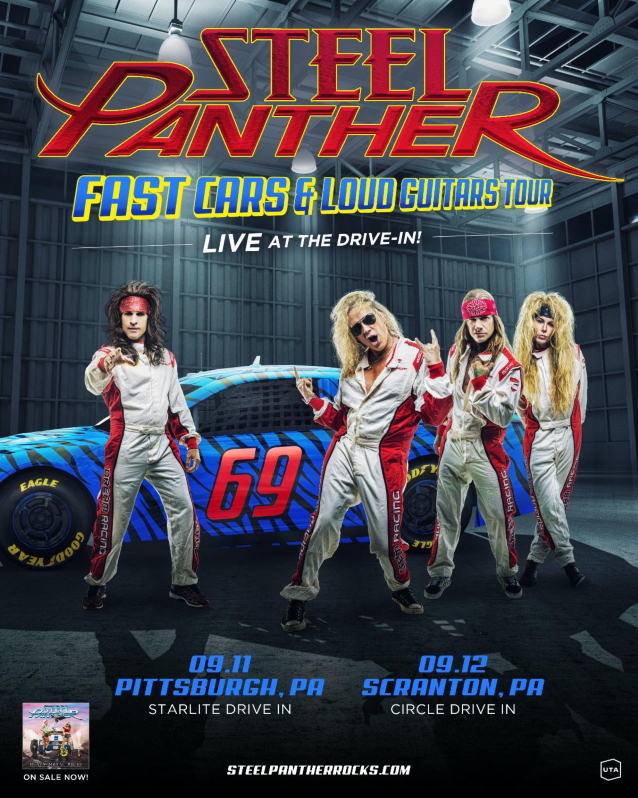