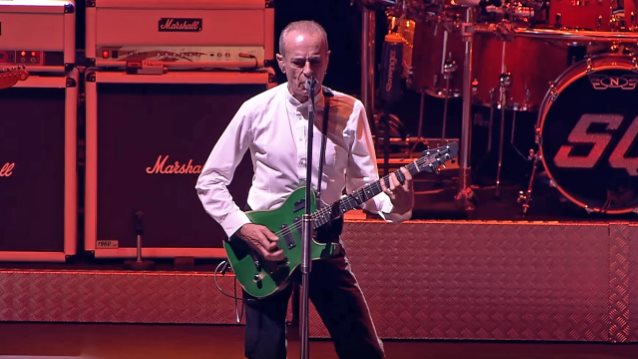 STATUS QUO frontman Francis Rossi (pictured) has commented on the death of his bandmate, Rick Parfitt, describing him as "the archetypal rock star."

Parfitt died in Spain on Saturday at age 68. The guitarist suffered from a severe infection after experiencing complications with a pre-existing shoulder injury.

Rossi said in a statement: "I was not ready for this.

"Rick Parfitt had been a part of my story for fifty years. Without doubt the longest relationship of my life, this was also the most satisfying, frustrating, creative and fluid.

"From those early days, we worked together to create the QUO sound, look and hits. We spent years on the road, on the stage and in the studio, rarely far from each other, honing what we did. We were a team, a double act, a partnership and yet also two very different people, handling the pressures of growing older, constant touring, dealing with success and keeping the creative flame burning in different ways.

"He developed his own sound, his own style, casually inspiring a generation of players.

"Rick was the archetypal rock star, one of the originals. He never lost his joy, his mischievous edge and his penchant for living life at high speed, high volume, high risk. His life was never boring, he was louder and faster and more carefree than the rest of us.

"There were any number of incidents along the way, times when he strayed into areas of true danger and yet still losing him now is still a shock.

"Even in a year that has claimed so many of our best, including now George Michael, Rick Parfitt stands out. I was not ready for this."

Parfitt had experienced a number of health setbacks over the years, including a quadruple heart bypass in 1997, a throat cancer scare in 2005 and a heart attack in 2011.

The guitarist reportedly quit drinking and smoking following the heart attack five years ago. Subsequent health scares had changed the way he lived his life even more, particularly the cardiac arrest he suffered earlier this year, which saw him collapsing on stage.

STATUS QUO was forced to cancel a number of shows in 2014 after Parfitt was told by doctors to rest following surgery to correct a problem with his previous heart bypass.

Parfitt and Rossi recently announced they were hanging up their electric guitars for good following one final tour.

In October, Parfitt said he would no longer be performing with the band after suffering a heart attack in the summer.

Freddie Edwards, the son of QUO bassist John "Rhino" Edwards, had been stepping in for Parfitt so that concerts did not have to be canceled.