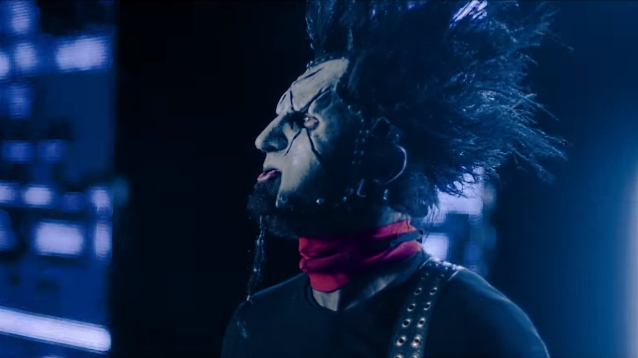 STATIC-X has released a new video featuring the as-yet-undisclosed guitarist/vocalist — rumored to be Edsel Dope from DOPE — who will join the band's surviving members on the "Wisconsin Death Trip" 20th-anniversary tour in June. DOPE will provide support on all legs of the tour — including in North America, Europe and Australia — with DEVILDRIVER co-headlining in North America, and WEDNESDAY 13 joining the trek in Australia, and SOIL and WEDNESDAY 13 appearing on all shows in Europe.

Drummer Ken Jay says about the addition of the new vocalist: "For us, the goal was 100% about recapturing the vibe and the spirit of STATIC-X. We were never interested in using a hologram or using Wayne's pre-recorded vocals. It has to be real and it has to have a soul and a pulse. STATIC-X has always been four guys. Two guitars, bass, drums, and vocals. We didn't want to mess with that formula. This is the most electric version of 'Wisconsin Death Trip' 2.0 that we can imagine, without actually having Wayne here with us."

Guitarist Koichi Fukuda adds: "At first, I was actually a little skeptical of how we could do all of this, but after I heard him sing, I was sold! I am so impressed with how far it has come in a short amount of time. We are working very hard to bring something very special to you all. I know that Wayne would be very proud of how much heart and effort has been put into this. It is truly an honor."

States bassist Tony Campos: "We were very lucky to find somebody who could fill such a unique role. We've all toured together and our bands came up together back in the day. This is just as special for him as it is for us. He was never interested in trying to make this about him and he was actually the one who suggested that the mask be the face of the memorial."

STATIC-X plans to perform the majority of its debut album at each show. The dates will serve as memorial events to honor Static, who passed away more than four years ago.

STATIC-X will release a new album titled "Project Regeneration", featuring the last recordings of Static, later this year. The rest of the group's original lineup will also be featured on the album and in the music videos.

On Tuesday, STATIC-X announced via its social media sites that it has "unexpectedly uncovered even more unreleased tracks left behind by Wayne. Because of this, the album will have fewer guest vocalists and more complete songs featuring lead vocals by Wayne Static," the group said.