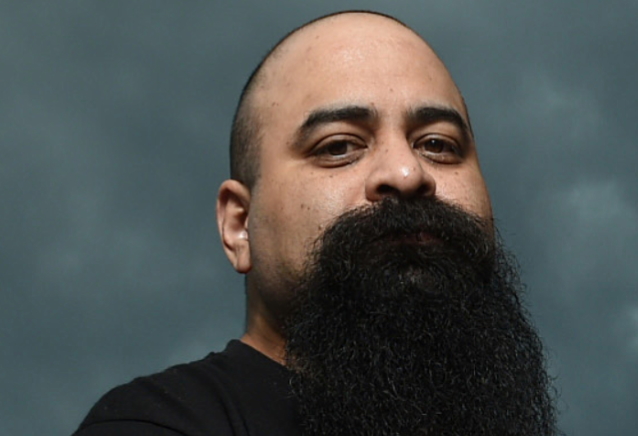 In a new interview with the "Rock & Roll Beer Guy" podcast, STATIC-X bassist Tony Campos reflected on the passing of the band's frontman Wayne Static nearly six years ago. Wayne died after mixing Xanax and other powerful prescription drugs with alcohol, according to the coroner's report. The 48-year-old Static, whose real name was Wayne Richard Wells, was found dead in his Landers, California home on November 1, 2014.

Campos said (see video below): "I don't wanna dwell on that stuff. It was just a really bad time for the band and for myself personally. Long story short, the band fell apart. Wayne got really involved with drugs and he got addicted and, unfortunately, it cost him his life.

"You can't help someone that doesn't wanna be helped. You can do whatever you think will help, but if the person doesn't want help, they're not gonna take it," he continued.

"Unfortunately, Wayne wasn't the first friend I lost because of drug addiction, so it was just like seeing it happen all over again to somebody else that I'm close with. And it sucks every time."

Asked if he is now a strong advocate against drug use as a result of his experiences, Campos said: "No, I'm not. I've always had the position of, 'Do whatever you want, but if it starts getting in the way of what you have to do, then you need to start rethinking your priorities.' I got to a point with alcohol where it was starting to affect my performances on stage, and I had to dial it back. And now I'm just old, and I can't handle hangovers anymore, so I've gotta dial it way back now."

According to Tony, it's "so easy" for touring musicians to "get caught up" in drinking and drugging while out on the road.

"When you, as an audience member, go to a show, you may go to a show once, twice, three times a week, maybe, tops," he explained. "For us, as musicians, we're doing this every night, so in every town, there's somebody new going, 'Hey, man. Have a drink. Smoke this. Do a line of this.' And when you do that every day, it catches up to you, man.

"The only thing I ever did was drink and smoke weed," Campos revealed. "I stay away from cocaine, just 'cause I tried crack once when I was 13, and I didn't like it. And that was it. I'm, like, yeah, I'm not gonna do any more coke after that. I guess I got lucky that I avoided that pitfall. And I've seen lots of friends get hooked on that and ruin their lives. It's easy to get caught up in that shit," he repeated.

STATIC-X's latest album "Project Regeneration Vol. 1", came out in July. The first of two volumes, it features 12 brand new tracks, containing many of the final vocal performances and musical compositions of Static, along with the original "Wisconsin Death Trip" lineup of Campos, drummer Ken Jay, and guitarist Koichi Fukuda. Both volumes are being worked on by longtime STATIC-X producer Ulrich Wild.