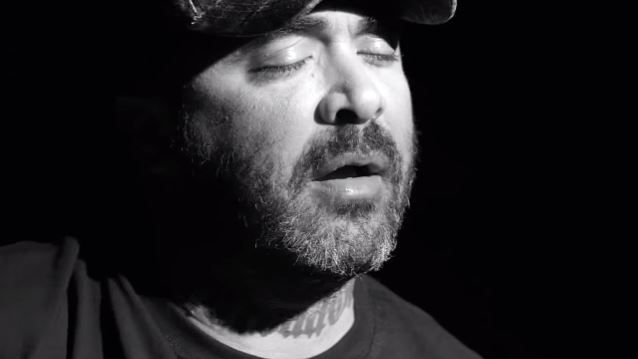 **UPDATE**: Aaron Lewis has released the following statement regarding his national anthem performance:

"All I can say is I'm sorry and ask for the nation's forgiveness. My nerves got the best of me and I am completely torn up about what happened.

"America is the greatest country in the world. 'The Star-Spangled Banner' means so much to so many, including myself.

"I hope everyone can understand the intensity of the situation and my true intent of this performance.

"I hope that the nation, Major League Baseball and the many fans of our national pastime can forgive me."

STAIND frontman Aaron Lewis botched the lyrics to the American national anthem earlier tonight (Sunday, October 26) at AT&T Park in San Francisco, California before Game 5 of the World Series, between the Giants and the Royals. During the second line of "The Star-Spangled Banner", he sang "what so proudly we hailed were so gallantly streaming" instead of "what so proudly we hailed at the twilight's last gleaming." The words "were so gallantly streaming" come a few lines later in the national anthem.

"I grew up watching the World Series," Lewis said prior to the performance. "It's a privilege and honor to be asked to be a part of such an important night."

Back in February 2011, Lewis slammed pop singer Christina Aguilera for mangling some words of the national anthem of at the opening of Super Bowl XLV. Instead of "O’er the ramparts we watch'd, were so gallantly streaming," Aguilera sang, "What so proudly we watched at the twilight's last reaming."

While performing in Westbury, New York a couple of weeks later, Lewis said about Christina's Super Bowl appearance (see video below): "I don't understand how people that sing the national anthem can be so fucking self-absorbed that they would try to change that fucking song. If there is a single song in the history of this country that deserves no creative interpretation, it's that one."

Lewis has just completed a stint on the second leg of Brantley Gilbert's "Let It Ride" tour and will now crisscross the country playing solo shows.

STAIND played just a handful of shows this year, with Lewis devoting much of 2014 to solo shows.

The last STAIND album, a self-titled effort, came out in 2011. The band does not yet have plans to enter the studio.