A two-and-a-half-minute video trailer for this summer's Download festival — featuring interview clips with members of SLIPKNOT, MÖTLEY CRÜE, KORN and DEVILDRIVER — can be viewed below.

The Download festival continues to take place at Donington Park, which has established itself as the original and "spiritual" home of all things rock since the first Monsters of Rock festival in 1980.

The benefit of Download festival at Donington Park in its seventh year is that it has enabled festival organisers to confirm some changes to the site layout, improving the festival experience of everyone attending this year. With the Download festival renowned worldwide for its excellent on site facilities and 24-hour entertainment, this year's event will more than ever reflect the recommendations from its fan base to make the festival bigger and better than ever.

"We have gone to great lengths to communicate with our core fan base and listen to what they want at Download in relation to facilities, activities and the bands," commented Live Nation COO and Festival Director John Probyn. "This year's festival is going to be better than ever with a brand new arena designed by our fans and a great line up of music." Live Nation VP of Promotions and Download festival Promoter Andy Copping added, "This year more than ever before, Download festival celebrates the history of Donington and all that is 'rock'. With acts such as SLIPKNOT, THE PRODIGY and MÖTLEY CRÜE already confirmed to play, this just shows how varied and diverse the rock genre can be and we are delighted to reflect this with our 2009 lineup." 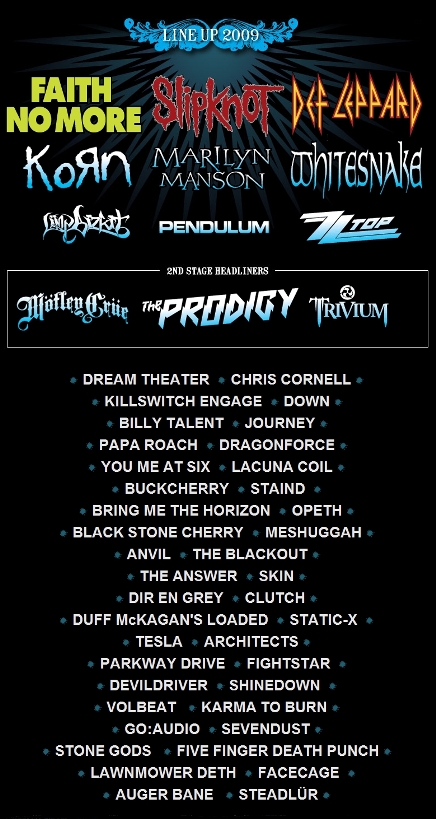