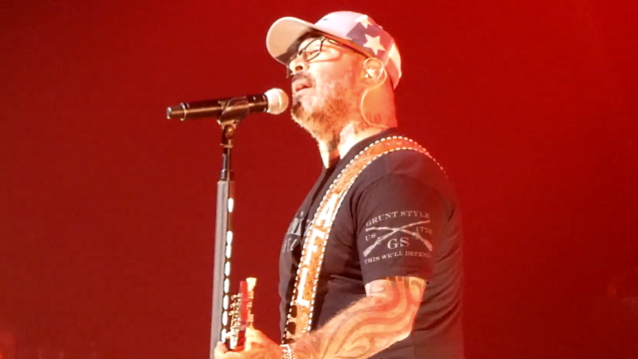 This year STAIND reunited for a few select shows after a five-year hiatus. After a wildly enthusiastic reception for exhilarating performances at Louder Than Life, Aftershock and two sold-out hometown concerts, STAIND will continue the charge, performing at Epicenter in North Carolina on May 2, Welcome To Rockville in Daytona Beach, Florida on May 9, and Sonic Temple Art & Music Festival in Columbus, Ohio on May 16.

"After reuniting and playing these shows this fall, we all realized how meaningful it was to be back on stage together and wanted to continue," says guitarist Mike Mushok. "It's going to be a fun summer… Don't miss it!"

Bassist Johnny April adds: "We're excited about getting back on the road, and getting our music out to some new fans.”

STAIND played its first full live show in five years on September 27 at the Louder Than Life music festival in Louisville, Kentucky.

Opening the show with the classic "Eyes Wide Open", from the band's 2011 self-titled album, to the roar of an energized crowd, STAIND played a set packed with its biggest hits, including "So Far Away", "Right Here", "Fade" and the No. 1 smash single "It's Been A While", one of the most played songs in modern rock radio history.

Prior to Louder Than Life, the last time STAIND performed was back in August 2017 at the "Aaron Lewis And Friends" benefit concert in Northampton, Massachusetts. The event saw three of the band's original members — Mushok, April and singer Aaron Lewis — playing a three-song acoustic finale with longtime drummer Sal Giancarelli. It marked STAIND's first live appearance in three years.

Mushok, who has spent the last four years recording and touring with ex-THREE DAYS GRACE vocalist Adam Gontier in SAINT ASONIA, recently told iRockRadio.com that STAIND was under no obligation to make an album at this stage of the band's career. "We don't have a label," he said. "It would be great to write some music. It doesn't have to be a full record at this point. We have a studio, and it would be easy to do. I think right now, it's, 'Let's get in a room together. Let's play together again. Let's do a couple of shows and see how it goes,' and kind of take it from there."