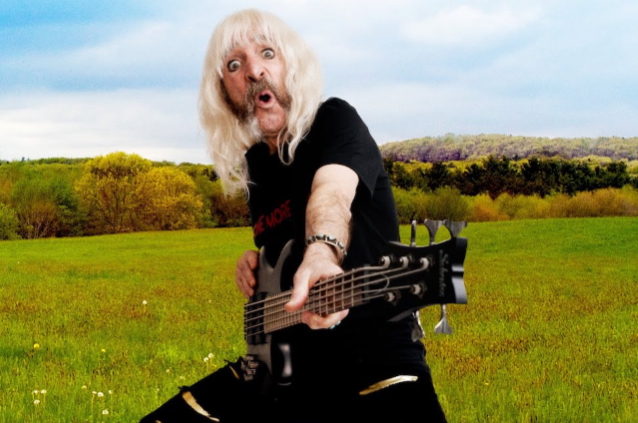 This November, Derek Smalls, former lead bass player of the band formerly known as SPINAL TAP, hits the road. Accompanied by a panoply of special guests, the bottom force of the fabled heavy metal band will play a whistle-stop series of concerts along the West Coast of the U.S. and Canada.

The "Lukewarm Water Live!" tour will kick off at the the Wiltern in Los Angeles on November 6, to be followed with performances at Moore Theatre, Seattle on November 9, The Vogue Theatre Vancouver on November 11 and finish at The Warfield Theatre San Francisco on November 14. Each performance will feature Smalls in concert accompanied live by an all-star band as well as a full symphony orchestra and other special guests live via satellite.

The series of concerts, which will act as a precursor to a major world tour planned for 2020, will feature music from his recently released album "Smalls Change (Meditations Upon Ageing)" as well as favorites from the SPINAL TAP songbook. "Smalls Change" is described by knowledgeable observers as a poignant and oftentimes furious contemplation on ageing that explores the passing of time and all things loud.

Special A-list guests from the world of rock will be announced in the lead up to the tour. This announcement follows a special staging of the show at The Palace in Los Angeles earlier this year which featured an array of guest talent, including Steve Vai, Steve Lukather, Dweezil Zappa, Paul Shaffer and TENACIOUS D (Jack Black, Kyle Gass) as well as live linkups with Donald Fagen, Jane Lynch, The Snarky Puppy Horns and The Budapest Symphony Orchestra.

Derek told United Rock Nations that it took him so long to record a solo album because he "kept thinking that SPINAL TAP was going to un-dissolve. We don't break up, but we do dissolve a lot, much like a fast-acting pain tablet," he said. "After 2009, we played Glastonbury festival outside London and Wembley Arena in London, and I thought, 'Right, here we go,' and I waited for the phone to ring. It didn't ring, so naturally, the first thing I did was call the telephone company and go, 'Is there a problem?' They said no, and I realized, no, it was the band dissolving again. I did a few other things, and I ended up in Albania hanging with a friend, Eddie Drake, who has a near-death metal band called CHAINSAW VERMIN. I would sit in with them every once in a while, and I thought, 'This is not the way it's going to end, being a sit-in bass player [with] CHAINSAW VERMIN.' I saw this advert from a U.K. outfit called the British Fund For Aging Rockers, and they're giving grants. Apparently, this is the money left over from austerity. I applied for it, and that's how this record came to be made. I didn't want to wait any longer."

Regarding the album's material, Derek said: "They're all new songs. I wrote one with [SPINAL TAP vocalist] David St. Hubbins when we thought we were going to do a SPINAL TAP tour. That's called 'It Don't Get Old'. The others were all written specifically for this record, because when the Fund For Aging Rockers was interviewing me, they said, 'Well, what's your idea?' I said, 'My idea is that you give me money and I make a record.' They said, 'No, no, no — what's your idea, idea?' — they said it twice, as if that meant something — and I thought, 'They say write about what you know. What do I know about? I know I'm getting older.' So that became the theme of the record. They said, 'Well, don't you think you're narrowing your target audience a bit doing that?' I said, 'There are only two types of people in the world — people who are getting older, and dead people. So we're aiming at the active part of the market."