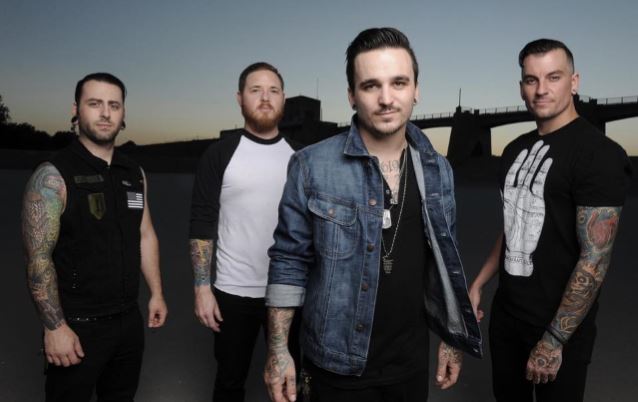 According to a press release, the CD is frontloaded with moshy breakdowns, which are tempered by soaring melodic choruses that will camp out in your brain for weeks at a time.

"Carousel" was recorded with producer Steve Evetts, who has previously worked with SUICIDE SILENCE, ARCHITECTS and EVERY TIME I DIE.

The band said: "We are ready to win the world over with 'Carousel', which is a journey through catchy choruses to the heaviest of breakdowns.

"This album offers a diversity and range of emotions, which are reflective of each member and the ride we have been on to this day.

"We are so eager to let the world into our hearts and for you to let us into your ears."

SPEAKING THE KING'S's humble origins can be traced back to 2011, when it began as a project between former bandmate Justin Bock, fellow guitarist Mike Entin, and drummer Will Peacock.

Their demos captured the attention of A DAY TO REMEMBER producer, songwriter, and former guitarist Tom Denney (PIERCE THE VEIL, SECRETS), who ushered the band into his Florida-based studio to record their first arsenal of music.

The band booked studio time but was missing a critical element — a singer!

The fevered search for a frontman ended with Bobby Burap, who was the total package, thanks to his stage presence and his ability to sing in both clean and aggressive registers. Plus, the singer's welding talents were a bonus, since touring bands never know when they'll suffer from a broken axle in the middle of nowhere and in 100-degree heat.

Since their inception, SPEAKING THE KING'S have shared stages with bands of their ilk, such as WE CAME AS ROMANS, OF MICE & MEN, WINDS OF PLAGUE, BLEEDING THROUGH and BLESSTHEFALL.