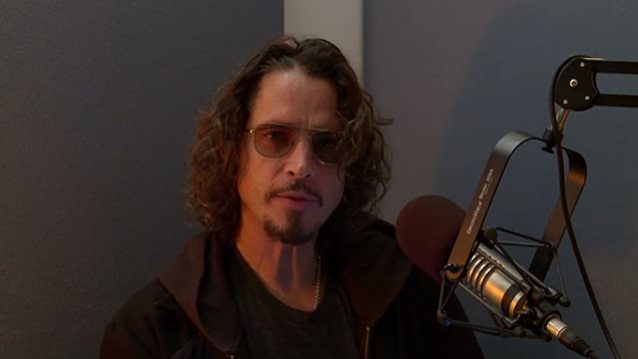 In May, "HardDrive" and "HardDrive XL" producer Roxy Myzal conducted an interview with SOUNDGARDEN singer Chris Cornell. You can now watch the chat in three parts below.

SOUNDGARDEN's breakthrough 1994 album, "Superunknown", was reissued this week in a deluxe 20th anniversary edition featuring a remastered version of the album and plenty of bonus content like rarities, demo tracks and B-sides. But the band is already looking ahead to more retrospective releases, as guitarist Kim Thayil revealed, telling Billboard.com, "We definitely have discussed giving this treatment to [1991 album] 'Badmotorfinger', for sure… 'Badmotorfinger' was very influential in the rock community. It had a strong influence on other musicians. 'Superunknown' probably did as well, but it's success was not just with musicians but with fans as well."

"Badmotorfinger" was SOUNDGARDEN's third studio album and first to go gold and then platinum. It also featured the first two songs by the band, "Outshined" and "Jesus Christ Pose", to get substantial commercial radio airplay.

Also in the works is a long-promised compilation of B-sides and non-album tracks, about which Thayil said, "I've been talking about that since the mid-90s... The B-sides and all that stuff will be compiled in the future into a separate, stand-alone record."

Singer Chris Cornell told The Pulse Of Radio why the B-sides set is important to SOUNDGARDEN even though it has been delayed for so long. "B-sides were sort of extra tracks for outside the U.S. releases," he said. " I always felt like that was sort of a backhanded slap to our fans in the U.S. or Canada, because those were our hardcore fans that had been there from the very beginning, and yet we're giving away this other stuff to other people. Because of that, we've always kind of been chomping at the bit to make this B-sides record."

SOUNDGARDEN will embark on a co-headlining North American tour with NINE INCH NAILS in July. Some of those shows may feature complete "Superunknown" performances.