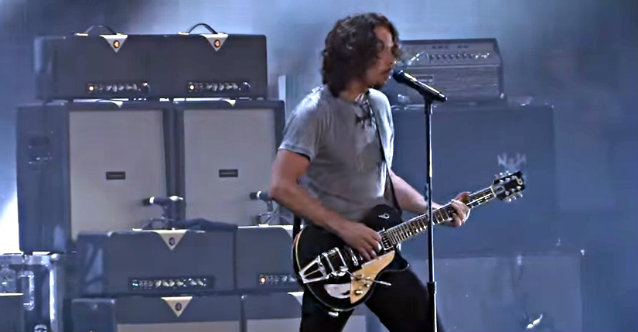 Fan-filmed video footage of SOUNDGARDEN's entire August 16 concert in The Woodlands, Texas can be seen at this location. A couple of the clips are available below.

SOUNDGARDEN will help celebrate the start of the NFL season by performing on Thursday, September 4 outside Seattle's CenturyLink Field as part of the 2014 NFL Kickoff presented by XBOX. Also scheduled to appear is the Grammy Award-winning singer, songwriter, rapper, and record producer Pharrell Williams.

Doors to CenturyLink Field's North Plaza open at 2:30 p.m. PT, with the performance to take place prior to the matchup between the Seahawks and Packers.

SOUNDGARDEN will kick off the free event with simulcast coverage of the 60-minute pregame show airing from 4:30 p.m. to 5:30 p.m. PT on NBC and NFL network.

SOUNDGARDEN's co-headlining summer trek with NINE INCH NAILS kicked off on July 19 in Las Vegas, finishing up on August 25 in Los Angeles.

The 20th-anniversary reissue of "Superunknown" was made available in two deluxe versions. The Deluxe Edition is a 2-CD package featuring the remastered album along with disc two consisting of demos, rehearsals, B-sides and more.