SOUNDGARDEN and KID ROCK will headline the third annual Northern Invasion, set to take place Saturday, May 13 and Sunday, May 14 at Somerset Amphitheater in Somerset, Wisconsin.

Northern Invasion hosts the biggest rock bands for over twelve hours each day on three stages, and offers a top-tier campground experience. In 2016, Northern Invasion expanded to two full days.

The powerful music lineup for Northern Invasion 2017 is as follows:

"Looking forward to bringing the SMACK to Northern Invasion," said GODSMACK's Sully Erna. It'll be awesome to share the stage with so many great artists."

Gavin Rossdale of BUSH said: "We are so excited to come play the Northern Invasion. So many killer bands I want to see… starting with SOUNDGARDEN. We plan on bringing the fire."

Presale weekend tickets and layaway packages, as well as hotel, camping and VIP packages, are available for purchase starting Tuesday, December 13 at 10:00 a.m. CST at NorthernInvasion.com. The layaway option allows purchasers to split the cost into four monthly payments.

A Northern Invasion presale password to purchase the following tickets can be found on the festival's social media pages:

Those looking for an expanded festival experience are invited to purchase hotel, camping and VIP packages. Available camping packages (RV and tent options for 3 nights) include Groupie, Roadie, Star, and Ultimate Package at Float Rite Park. Hotel packages offered for 3 nights are: Bronze, Silver, Gold, and Platinum. All camping and hotel packages include a $25 festival merchandise voucher for each person.

The Northern Invasion public onsale is Friday, December 16 at 10:00 a.m. CST. Beginning at that time, ticket prices will increase, so fans are encouraged to buy during the presale. At the public onsale, prices will be as follows:

As in the past, General Admission ticket discounts will also be available for active military through Northern Invasion partner GovX.

Northern Invasion is produced by Danny Wimmer Presents and AEG Live and is part of the World's Loudest Month concert series, which features the biggest names in rock music performing in eight distinct U.S. concert atmospheres in during six consecutive weekends in April, May and June of 2017. 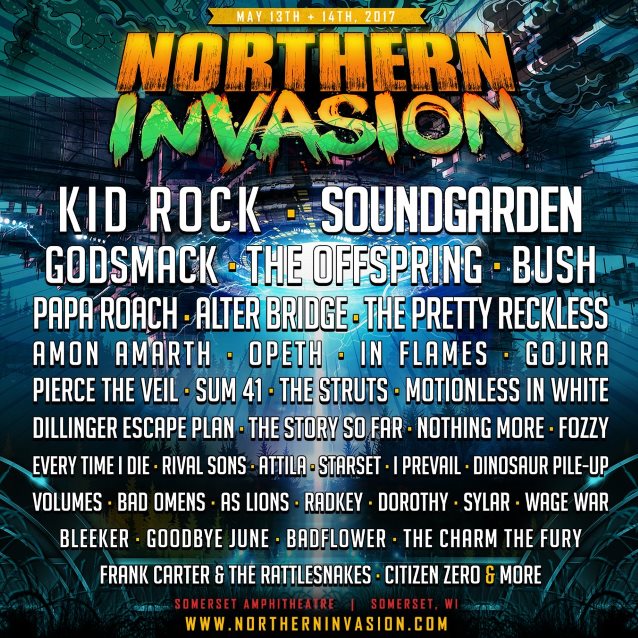