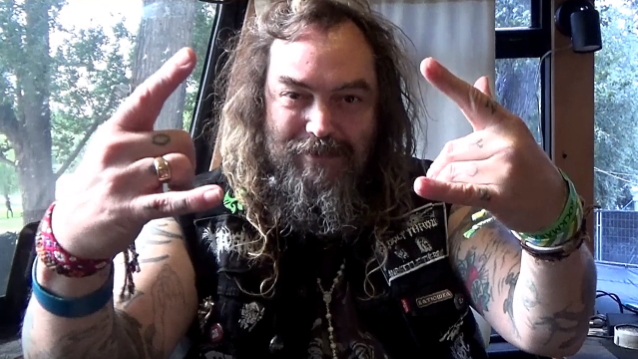 Impact metal channel conducted an interview with SOULFLY frontman Max Cavalera prior to the band's July 12 appearance at the Rockmaraton festival in Dunaújváros, Hungary. You can watch the entire chat below. A few excerpts follow (transcribed by BLABBERMOUTH.NET).

On reflecting on SOULFLY's career since the band's 1997 formation:

Max: "I think it's cool. There's a lot of music. I don't have any regrets, really. I think it's really exciting to have so much material. There's a lot of records in that time. 'Ritual' was our 11th album. I've been with some of these guys in SOULFLY more than any other band. Like Marc Rizzo [guitar] has been with me since 2004. Now I have my son [Zyon] playing [on drums], which is a dream come true for me. I really like this SOULFLY with Mike [Leon, bass], Marc and Zyon. We have really good chemistry between us. I think it's cool I set out to be something a little bit different from SEPULTURA, and it turned out to be a little bit different. I still have the stuff I do with Igor [Cavalera, former SEPULTURA drummer and Max's brother] when we go back to the old records like we did with 'Roots'. We're doing 'Beneath The Remains' in November, I think, here in Europe, and 'Arise'. It's a lot of fun. So I get to do both. I still play those old records that I love, and I have SOULFLY's whole catalog, like the setlist, I can really change from day to day. We never really repeat the same setlist. I'm proud of the work. I'm proud that SOULFLY stood our ground and rode the wave."

On the greatest lesson he's learned as a musician:

Max: "I think the best is 'No Hope = No Fear'. It's kind of like a song that means a lot to me because it's where I was at that time when I wrote it. It's a really strange feeling to have when you don't have any hope, it's like you don't have any fear. You just do whatever you want. I think a little bit of that. I don't get caught up too much on the 'technical' side. I like more of the more loose attitude, more about the energy and the spirit than try to be too technical. I don't care much for that. And have fun, because if you're doing this and you're not enjoying it, stop doing it. You have to enjoy what you're doing."

On who is on his "bucket list" to work with:

Max: "All the classic singers to me, all the classical gods are still alive: Ozzy Osbourne, Rob Halford [JUDAS PRIEST], Bruce Dickinson [IRON MAIDEN]. That right there, it's the three I'd really like to do something with. But we'll see. I'm very happy with the collaborations I've done so far. The last record we had Randy [Blythe] from LAMB OF GOD and Ross [Dolan] from IMMOLATION. That was really cool. So, yeah, we'll see what happens. Those three would be really cool to do something with. From the era I grew up with, the SEPULTURA [era], Tom Warrior from CELTIC FROST, TRIPTYKON, I would like to do something with him. I also like ABBATH. I don't know. We'll see. It's cool. We'll see what happens. I love collaborations. Eventually, something always comes up."

On the eventual void that will be left when metal's classic bands retire or its members pass away:

Max: "I think it's life. It's a part of life. It's just how it is. The whole SLAYER [retirement] thing. I don't understand how they do it. I want to play forever. I don't have a retirement plan. I don't know what to do if I'm not playing music. If I'm not playing, creating, I go nuts, literally, I go insane. But, that's them. They're doing it. Good for them. I'm happy. They're a really great band, influenced a lot of people. They created a lot of great music. That's how they want to go out. But there's always going to be newer bands coming up. There's a whole gang of new bands. I like a lot of the heavier stuff in America right now like GENOCIDE PACT, GATECREEPER. There's good music all the time. It'd be a change of the guard. I'm happy that we still have IRON MAIDEN; we still have JUDAS PRIEST; we still have SAXON. Some of those bands are still holding up. To me, that's cool. That's exciting."

SOULFLY's 22-date trek U.S. tour will kick off on September 3 in Dallas, Texas and make stops in Baltimore, Houston and Albuquerque before concluding in Los Angeles on September 29. Support on the tour will come from UNEARTH (September 3 - September 16), INCITE, PRISON and ARRIVAL OF AUTUMN.