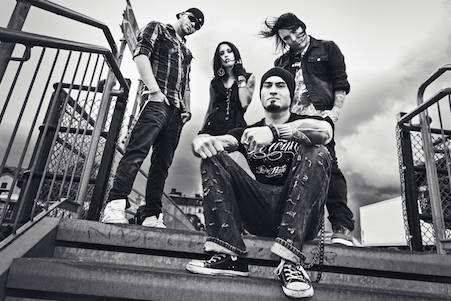 Commented SONIC SYNDICATE guitarist and main songwriter Robin Sjunnesson: "We've been writing songs for over a year now and it just feels sick to start laying these bad boys down.

"This album is feeling kind of dark, heavy and melodic which fits perfect with the January weather here in Scandinavia.

"We have Roberto Laghi sitting here in the driver's seat.

"Everything just feels perfect this time around.

"We've worked with Roberto in the past and have become good friends over the years, so this time around he'll be producing the album as well as mixing, which he's done with the last two albums.

"We have a few guests popping into the studio over the next two months, and for those who are interested, we'll be posting updates via all our social networks starting today, so join in the madness and hash tag our asses."

SONIC SYNDICATE will make appearances at various open-air festivals over the summer and will tour in the fall 2014, marking the band's first trek in over three years.

Finnish radio station Radio Rock recently conducted an exclusive interview with SONIC SYNDICATE's own Nathan J. Biggs to talk about the band's hiatus and the forthcoming glorious return. Check out the 10-minute chat in three parts below.

SONIC SYNDICATE's latest album, "We Rule The Night", was released in Europe on August 27, 2010 via Nuclear Blast Records. The CD was recorded at Bohus Sound studios in Kungälv, Sweden with producer Toby Wright, who has previously worked with KORN, SLAYER, MÖTLEY CRÜE, KISS, FEAR FACTORY, IN FLAMES, STONE SOUR and OZZY OSBOURNE, among others.