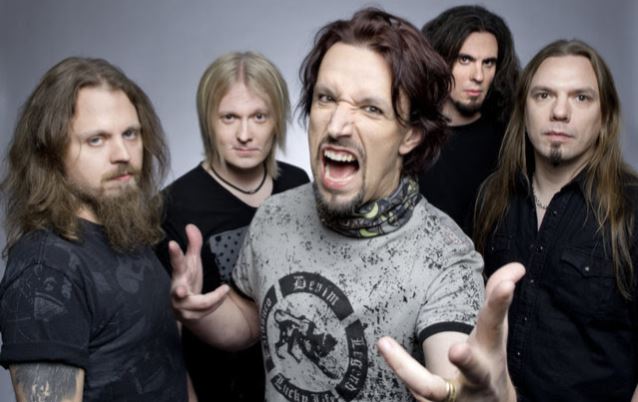 Finnish melodic metallers SONATA ARCTICA have commenced work on the follow-up to their "Pariah's Child" album. Like its predecessor, the as-yet-untitled ninth studio effort will be recorded at Studio 57 for a late 2016 release via Nuclear Blast.

Regarding the musical direction of the new album, SONATA ARCTICA keyboard player Henrik "Henkka" Klingenberg said: "It's really too early to say how it will turn out. Having said that, I expect the usual SONATA ARCTICA trademarks to be found on it. We will, however, get this album done in time for a fall release and we'll tell you all more as things progress..."

He added: "At the moment we're taking a break from the recording of our ninth studio album and heading out with NIGHTWISH for a couple of months in North America. When we get back, we're more or less going straight into the studio to continue working on the album."

SONATA ARCTICA's U.S. tour with NIGHTWISH will kick off on February 19 in Sayreville, New Jersey and end in New York City on April 3.

To promote the upcoming album, SONATA ARCTICA will hit the road again in October, supported by Swedish metallers TWILIGHT FORCE.

Says SONATA ARCTICA: "We're all really looking forward to finishing our new studio album and taking the songs on the road. This time we'll start in Europe before heading on to the rest of the world. As always, you can expect an energetic show with new stuff as well as some old favorites."